SINGAPORE - The Singapore National Olympic Council has issued marathoner Soh Rui Yong a formal warning on Monday, following his breach of regulations regarding the promotion of personal sponsors during the sponsors' blackout period ahead of the SEA Games.

SNOC secretary-general Chris Chan said in a statement that, despite repeated reminders and constant guidance offered to Soh, he has not fully complied to remove the infringed social media posts after a meeting with the chef de mission and team manager last week.

As a result, Toh Boon Yi, the co-chairman of the Major Games Preparation Committee - which has been administrating and managing the SEA Games 2017 athletics team since June - issued him a formal warning, advising him to cease the infringements, failing which, disciplinary proceedings will follow accordingly.

Soh has agreed to comply from now on.

Said Chan: "Representing Singapore at the major Games is a privilege which many athletes hope for, but also one that must be treated with utmost respect and responsibility on the part of an athlete.

"As representatives and ambassadors of the country, there is a code of conduct which athletes and officials have to abide to. There is no exception to this. 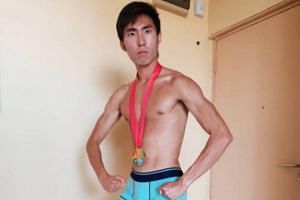 "We hope Rui Yong will now focus on this preparations seriously and cooperate with the officials to get ready for the SEA Games."

When contacted by The Straits Times, Soh said that he has cooperated and taken the posts in question down immediately after the meeting.

However, he insisted that he did not violate any regulations, and felt "betrayed" that the SNOC statement was released just hours after the meeting.

He said: "I definitely wasn't trying to promote any brands, so to me it wasn't a violation of the rules. I was never told that sharing posts by other people was not allowed."