SINGAPORE - Tears flowed freely on the pool deck at the New Clark City Aquatic Centre on Thursday (Nov 28), after the Singapore men's water polo team were beaten 7-5 by Indonesia in their SEA Games round-robin match, almost certainly putting an end to the Republic's five decades of dominance in the event.

Singapore have won every gold medal since the competition started in 1965, and clinched a 27th straight title in Kuala Lumpur two years ago despite a shock 4-4 draw with arch-rivals Indonesia then.

"We're definitely upset as we all put in a lot of effort and it sucks to lose," said team captain Koh Jian Ying, who is competing in his fifth SEA Games. "The disappointment is bigger in that sense (for not winning the 28th gold)."

The Republic had started their campaign with a 17-5 victory over Malaysia on Wednesday.

But the loss of left-handed right winger Wayne Chong to a wrist injury was a blow for the Singaporeans, who struggled to find any rhythm against the Indonesians as the first quarter ended 1-1.

Capitalising on the Singaporeans' errors, the Indonesians outscored their opponents 4-1 in the next period and never relinquished the lead after that to seal a historic victory over the region's water polo powerhouses.

This is the first time Singapore, who finished sixth at last year's Asian Games, have lost a water polo match at the biennial SEA Games in 54 years.

Koh, 28, said: "Indonesia played a good game and we didn't play our best one. But this is sport and things can happen." 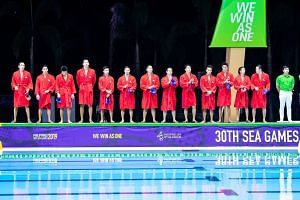 Indonesia had drawn their opener 6-6 against the Philippines on Tuesday before beating Thailand 17-12 a day later. They lead the standings on five points after three games, with two points awarded for a victory and one point for a draw.

If Indonesia win their final game against bottom team Malaysia on Friday, they will finish top of the standings on seven points - regardless of Singapore's results in their final two matches against the Philippines (Friday) and Thailand (Sunday).

Singapore are currently on two points. The five-team tournament is based on a round-robin format so there are no play-off matches for gold.

With Singapore losing their tag as the top men's water polo team in the region, Singapore Swimming Association vice-president (water polo) Dominic Soh told The Straits Times that it was "like losing a pot of gold".

He added: "This reminds us that it is difficult to remain at the top and we need to review and see where we are.

"It's not so much a revamp of the system but identifying the gaps and recognising that countries around us are capable of getting expert advice and developing themselves."

"But sport is never a sure thing. The only sure thing is the belief we can and must have in each other to rise above setbacks, adversity and challenges and come back stronger together."

Koh added: "The competition is not over... Our motivation remains the same, we always give our best and that will not change."