SHAH ALAM, MALAYSIA - The 2018 Asean Schools Games drew to a close on Thursday (July 26) at the Ideal Convention Centre in Shah Alam, Selangor, marking 10 years of the event serving as a platform for the region's most promising student-athletes.

Hosts Malaysia handed over the Games flag to Indonesia, which will be the venue for the next year's competition.

The result was comparable to Singapore's last away ASG performance, when the 2016 contingent picked up 13 golds, 14 silvers and 30 bronzes in Thailand.

Reflecting on the impact of the ASG, the Ministry of Education's divisional director for student development curriculum Tan Chen Kee said its value for Singapore's young athletes has been "manifold".

She said: "From both a sports talent and character development point of view, the ASG is a natural progression from the National Schools Games.

"Our students do develop a sense of resilience during the NSG but it's when they bear the flag and go overseas that we see them really grow because it's country versus country and the pressure is real. 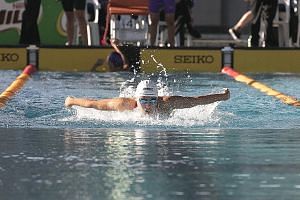 "The ASG is a very powerful platform for teaching our kids about Asean too because you're all young people similar in some ways and yet there are all these different cultures. That's why we pull out all the stops for the Games."

While a repeat of last year's showing (24-27-27) on home soil was always going to be difficult, the 190-strong Singapore contingent produced some memorable performances in Malaysia.

Swimmer Mikkel Lee was the Republic's top performer for the second straight year, winning four golds, one silver and breaking three meet records. He and his fellow swimmers accounted for seven of Singapore's 13 golds.

The 16-year-old said: "If you compare the ASG results from the last few years, you'll see that everyone in Asean has been improving tremendously. I won the 50m backstroke last year in 27.75sec but that was slower than the last swimmer in the final this year. It shows that we have to got to up our training to keep up."

There were unexpected golds for Singapore in athletes and squash. High jumper Kampton Kam struck gold with a Under-20 national record of 2.10m while in squash, which was making its ASG debut, Bairavarasu Rutvik Rau overcame fancied Malaysian opponents in the semi-final and final to claim the boys' singles gold.