TOKYO (AFP) - Once mere cannon fodder for rugby's big guns, Japan have staked their place as serious global players after their dream run to the World Cup quarter-finals - and are now looking to capitalise on their success.

The tournament hosts defied odds of 50/1 to top Pool A with a perfect four wins, including explosive victories over Six Nations powers Ireland and Scotland, to reach the knockout stage for the first time.

Not even a 26-3 thrashing by eventual champions South Africa could diminish the remarkable achievement of Jamie Joseph's Brave Blossoms in becoming the first Asian side to reach the last eight - and the first Tier Two team since Fiji in 2007.

Japan failed to build on the feel-good factor generated four years ago when Eddie Jones led a side he had once described as a World Cup "joke team" to three victories, including an astonishing 34-32 upset over the Springboks.

But Japanese officials are determined not to repeat that mistake after the team's breathless performances swept the hosts past Russia, Ireland, Samoa and Scotland, sparking rugby-mania across a nation infatuated with baseball.

"People said stadiums would be empty, Japan would get heavily beaten - there was no point having the World Cup here," Koji Tokumasu, senior director of the World Cup organising committee, told Agence France-Presse.

"But these miraculous things happened, one after another - now there's a lot of talk Japan will get more games against Tri-Nations or Six Nations teams."

The cult of celebrity plays big in Japan, where a life-size chocolate statue of former England footballer David Beckham once popped up outside a Tokyo confectionery store at the height of his stardom.

Japanese rugby fans adopted New Zealand as their second team at the World Cup, largely because the All Blacks were already famous in the country, appearing on billboards and television commercials. 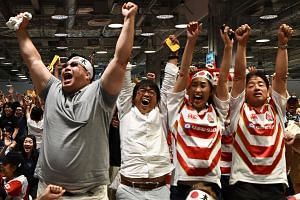 Rugby: More than half of Japan tuned in for World Cup victory over Scotland

But the fever pitch at Japan's games was next-level stuff.

Pictures of Japan's history-making heroes were splashed all over the country's newspapers, with jet-heeled wingers Kenki Fukuoka and Kotaro Matsushima - who Joseph calls his "Ferraris" - grabbing many of the headlines.

"It's scary to think how far this team can grow," said talismanic captain Michael Leitch. "Japan are only going to get stronger."

"It's been brilliant to see the rise of Japanese rugby," said Springboks legend Bryan Habana.

"In this tournament the fairy tale was really special. Not only them winning games but the manner in which they did," added the 2007 World Cup winner.

"I wanted to take all the emotion and atmosphere that I was feeling and put it in a bottle."

With a population of 126 million - more than 26 times that of New Zealand - Japan has fewer than 100,000 registered rugby players, and less than two percent of teenagers play the sport.

Japan's Top League has lured the likes of Sonny Bill Williams, Dan Carter and George Gregan with monster pay cheques, while just-retired All Blacks captain Keiran Read and Australian scrum-half Will Genia are among those on their way.

Despite the regular arrival of big names, last season crowds averaged just 2,500 - but that could be set to change.

Tokumasu noted that "lots of kids are knocking at the door" of the rugby school in Tokyo after being bewitched by the Blossoms.

Japan's World Cup success briefly took them to sixth in the world rankings and even led to calls to bring them into the Rugby Championship alongside the All Blacks, South Africa, Australia and Argentina.

"Their rugby has been of such a high standard, such high quality, I'm not sure going back to playing in the Pacific Cup is going to really cut it," said former England captain Lawrence Dallaglio, who proposed Japan be involved in the Rugby Championship or Six Nations in the future.

"What they have done in the last eight years has been phenomenal. It's not about the national team - it's about the grassroots of the game as well. Hopefully the next generation will have been inspired by their heroes."

"They need to move quickly because this audience will move on," he told AFP. "Rugby sevens next year in Tokyo 2020 is a massive opportunity to keep rugby on the national agenda. But we need to work fast with them and with other stakeholders to get those opportunities in place."