PERTH, AUSTRALIA (AP) - Australia and New Zealand will continue searching for optimal combinations ahead of the Rugby World Cup when their experimental teams meet Saturday (Aug 10) at the start of a two-test series for the Bledisloe Cup.

Rather than hone combinations both teams have opted to tinker with their lineups in the late stages of their build-ups to the world championship, which begins in Japan in less than six weeks.

The All Blacks have named Ardie Savea on the blindside flank for the first time in his 36-test career as part of what head coach Steve Hansen calls his best back row combination.

They have continued, for the second test in a row, the two playmaker approach which sees Richie Mo'unga at flyhalf and Beauden Barrett at fullback and they will try another midfield combination.

The Wallabies have chosen the prodigal James O'Connor at centre in a move which surprised even the All Blacks and which hints at an attempt to play a more attacking style.

With only two major matches left before the Cup the instability of the Wallaby and All Blacks lineups suggest neither side is yet sure of its best combinations for the World Cup.

The All Blacks' new-look back row is partly a response to the continued absence of regular blind side flanker Liam Squire who made himself unavailable for the Rugby Championship and Bledisloe Cup after missing most of the Super Rugby season with injury. 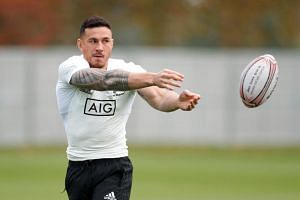 It is not clear whether Squire will return for the World Cup. If not, the All Blacks may use the combination of Savea, Kieran Read at No. 8 and Sam Cane on the open side in the major matches in Japan.

That would be far from ideal. Savea is not a natural blindsider, considered too small for the role. It was thought likely Hansen would move Read to the blindside and start Savea at No. 8 but he has chosen to keep his captain at the back of the scrum as he struggles to regain form after injury.

The Mo'unga, Barrett partnership will likely continue at the World Cup unless it proves untenable in the Bledisloe series. The midfield is more troublesome and it seems the selectors aren't sure of their best combination with Ryan Crotty injured and Sonny Bill Williams lacking match fitness.

Meanwhile, Wallabies coach Michael Chieka has given himself the chance to look at the skills O'Connor can bring to the Australia backline.

The Bledisloe Cup series is both a means to an end and an end in itself for both teams.

Hansen says the All Blacks consider the annual contest with Australia second only in importance to the World Cup.

While the Wallabies say the World Cup is the season's ultimate objective, they are also aware they haven't held the Bledisloe Cup for 17 years and, for many departing players, this will be their last chance to win it.

At the same time, there is a sense of increased tension between the coaches, if not the teams, after an off-hand comment by Hansen angered Chieka.

Earlier this year former Wallabies flyhalf Mark Ella said the All Blacks had such depth of talent Mickey Mouse could successfully coach them. Asked about the comment at a function, Hansen joked that Mickey Mouse couldn't coach New Zealand because he was already coaching Australia.

The comment reportedly riled Chieka who is known to be extremely sensitive to personal slights.

Hansen said this week that he didn't intend to insult Chieka.

"You can make a big thing out of it if you want or you can take it for what it was; something in jest," he said. "I've got plenty of respect for what Michael has done really."