LONDON (REUTERS) - England coach Eddie Jones said he would be bringing in an expert to help his team deal with mental pressure ahead of the Rugby World Cup, after they gave up a 31-0 lead to draw with Scotland at the weekend.

England needed a late try to salvage a 38-38 draw at Twickenham in Saturday's (March 16) sensational climax to the Six Nations championship but he said his team's tendency to squander leads was becoming a "recurring theme".

"It's like we have some hand grenades in the back of a jeep, and sometimes they go off when there's a lot of pressure," Jones told the British media.

"It's a bit of an intangible issue, but when you coach a team you can feel if it's there or not."

The Australian said the problem went back to before he took over as coach in the wake of England's humiliating exit from their own World Cup three-and-a-half years ago.

"The team has probably had it since the 2015 World Cup," the former Australia and Japan coach added.

"Whenever you have a difficult tournament or difficult games, there's always a lingering thought process there.

"Sometimes it takes longer than you'd like to fix it. It comes in when you get under a lot of pressure and you can't work out a way to get back to what you want to do.

"The All Blacks had this problem for eight years and it cost them two World Cups. It's not an easy problem to fix. We've had four years, we're getting there. It's about how you think under pressure."

Like most top sports teams, England already have a consultant "sports mind coach" but Jones said he was looking to bring on board someone with more specific expertise. 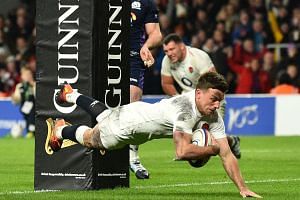 "It's a combination of personnel," he said. "But I've got one person that's going to help us that's a bit of an expert. I'm not sharing that name now. I haven't used her before.

"It's about working on the way we think. We have people working with us... But I'm talking about a different area now. It's about how the team thinks under pressure."

Jones said it was possibly a good thing that the problem had been exposed so starkly against the Scots in a match that secured England second place in the Six Nations behind Grand Slam-winning Wales.

"When we won 18 games in a row, we still had those problems," he said.

"And they have come to the fore in a couple of games recently, which is beneficial for us because it's made it quite clear what we have to fix to be the best team in the world."

England, world champions in 2003, have been pooled with three-time finalists France and twice semi-finalists Argentina as well as the United States and Tonga at the World Cup in Japan from Sept 20 to Nov 2.