SINGAPORE- National rower Saiyidah Aisyah has become the first Singaporean rower to qualify for the Olympic Games by finishing first in the B final of the 2,000 metres women's single sculls event at the 2016 Fisa Asia and Oceania Continental Olympic Qualification Regatta on Monday morning.

The 28-year-old clocked 7 min 53.13seconds at the Tangeum Lake in Chungju, South Korea to earn a coveted spot at the Rio Games in August.

Only the top seven rowers at the qualifying regatta qualify for Summer Games in Brazil. These currently comprise all six rowers in the A final - Indonesia, Iran, Kazakhstan, South Korea, Taipei, Vietnam - and Saiyidah, winner of the B final. 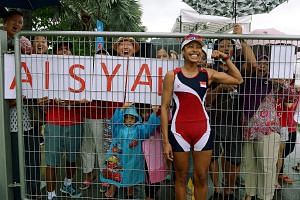 Saiyidah moved to Sydney last year and has spent most of her life savings in order to train full-time and chase her Olympic dream.

Geraldine Lee and Lim Heem Wei became Singapore's first canoeist and gymnast respectively to qualify for the Olympics at the London Games in 2012.