The 24-year-old, who suffers from muscular dystrophy, a muscle-wasting disease, clinched gold in the women's 50m backstroke S2 event at the Olympic Aquatics Stadium in Rio.

"Pin Xiu’s sporting journey was not easy," he wrote on Facebook. "Where others may have given up, Pin Xiu presses on, even in the face of increasing difficulties. Pin Xiu, your resilience and tenacity are amazing. Your hard work and dedication have paid off and you have done Singapore proud with your performance in Rio!"

"Pin Xiu is the first Singaporean to win multiple gold medals at the Games. Last week, she won the 100m backstroke S2 with a new world record." he wrote in a Facebook post. "Well done Pin Xiu! The Games are not over yet. To all our Team Singapore athletes - press on, we are all cheering for you!"

Minister for Culture, Community and Youth Grace Fu, who is in Rio to support the athletes, posted a group picture of Yip, her coach and parents.  "Emotional moment when life goal is met," she wrote.

Minister for Social and Family Development Tan Chuan-Jin, who is also Singapore National Olympic Council president, watched Yip's race at the Singapore Sports Institute with other athletes and supporters.

She was the Republic's first Paralympic champion when she triumphed in the 50m back S3 race at the 2008 Beijing Games. She also won silver in the 50m freestyle S3 in China.

Yip's three golds and four medals overall makes her one of Asia's most successful Paralympic swimmers. 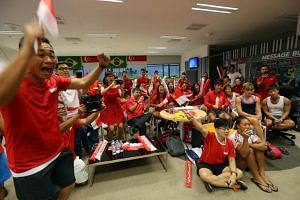 In the mixed zone after her race, Yip admitted that she was "really nervous" before entering the pool - even more so than when she competed in her pet event of 100m six day ago (Sept 9, Brazil time).

She had spent just 30 per cent of her time training for this race, focusing mostly on her pet event.

She said: "When I touched the wall, I didn't know who won, I couldn't tell when I saw the crowd. My myopia is about 200 plus and I can't see the scoreboard without my spectacles. It was only when I got to the side (of the pool) that I saw coach's face and I knew we did it.

"I'm happy about the race, I'm so grateful for the team, for Singaporeans supporting us. The support they have shown us in the past week has been enormous."

With a nudge from buddy Theresa Goh, who was there to watch her race, Yip said: "I'm happy I'm done [with the race]!"

Minister for Culture, Community and Youth Grace Fu congratulated Yip and Goh, who won bronze in the 100m breaststroke SB4 event on Sunday, after Yip's race.

She said: "We're so proud of the both of you, thank you so much for doing Singapore very proud, for the flag to fly here and for the national anthem to be played here."

Ms Fu landed in Rio this morning and watched the Singapore para-athletes compete in equestrian and swimming today.