TOKYO (Washington Post) - With just 1½ years to go before the opening of the Tokyo Olympics on July 24, 2020, construction of the New National Stadium, the Athletes' Village and other related facilities has entered the final stretch, with completion slated for within the year.

However, work at some venues has been delayed, which could affect test events meant to be held this summer before the international event.

Measures against possible traffic congestion and heat waves in the Tokyo metropolitan area have gradually taken shape, but not much time is left.

At Ariake Tennis Park, which is undergoing refurbishment, unfinished lighting poles are all that is seen standing at a planned site for outdoor tennis courts, as the bankruptcy of a contractor in October last year has stalled the renovation work.

The Tokyo metropolitan government concluded a new contract with a different company on Jan 11, but the completion of the renovation work will be delayed until March 2020 from the initial plan of July.

It is feared this delay will influence a test event that the International Olympic Committee mandates the host country hold at the same venue where the official games will be held. The All Japan Tennis Championships are scheduled for October at this park as an Olympic test event.

The Tokyo government plans to promote the advance preparation of three out of 17 outdoor courts by the end of August and to make arrangements with the Japan Tennis Association. However, the association is baffled by the suggestion because "at least 11 courts are necessary to organise the tournament, and three courts falls way short of hosting the event," an association official was quoted as saying. 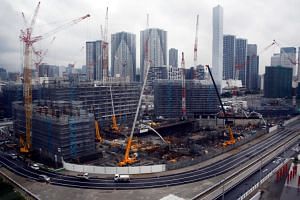 Meanwhile, the Tokyo Aquatics Centre in the same ward, which is the Olympic venue for swimming, was found to have used seismic isolation and vibration control oil dampers that were manufactured on the basis of falsified test data. The falsification came to light in October last year.

The metropolitan government has urged the maker of the dampers to investigate their safety, but it is not yet known whether replacements are necessary.

"We must deal with the problem so as not to affect the completion of the construction work in February next year as well as a test event to be held in April the same year," said a metropolitan government official in charge.