RIO DE JANEIRO - The stage was set for the grandest of farewells for one of the Olympics biggest stars and Usain Bolt did not disappoint with a picture perfect send-off.

The Jamaican, who ran the anchor leg,together with team-mates Yohan Blake, Asafa Powell and Nickel Ashmeade stormed to victory in the men's 4x100m relay at Rio's Olympic Stadium on Friday night in Brazil.

They clocked 37.27 seconds to finish ahead of Japan (37.60sec), sealing the country's third straight win in this event.

"My team came through for me tonight," said Bolt. "As long as we got the baton round, it was never in doubt."

The United States crossed the line in third (37.62sec) but were disqualified after the race. Canada (37.64 sec) were promoted to the bronze medal position.

American Justin Gatlin, who ran the second leg, said: "It was a nightmare man, especially towards the end of the victory lap. You work so hard with your team-mates, work so hard to have a bond and it goes away. All that work just crumbles." 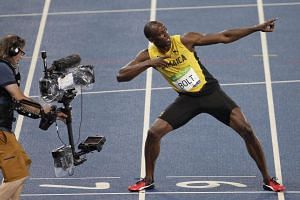 Olympics: No 200m world record for Usain Bolt but he still wins gold in 19.78 seconds 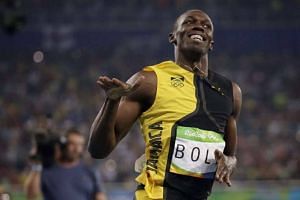 For Bolt, who celebrates his 30th on Sunday, also the day of the closing ceremony, it signalled the final curtain on his phenomenal Olympic career.

This was his ninth Olympic title and completed his "triple treble" bid. He has won the 100m, 200m events earlier in the week and had swept all three events at the 2008 Beijing and 2012 London Games.

"There you go. I'm the greatest," he said. "I'm going to stay up late and have fun. I never knew this would happen when I started out."

Bolt has on several occasions stressed that this will be his final Olympics and he does not intend to race at the 2020 Tokyo edition.

He will compete in next year's World Championships in London, where he will run the 100m and 4x100m. It will be his last major international race.