TOKYO (REUTERS) - Japanese Olympic Committee (JOC) chief Tsunekazu Takeda, who is under investigation for suspected corruption, said on Tuesday (March 19) he will step down from his position when his term ends in June and resign from the International Olympic Committee.

French prosecutors have questioned Takeda in Paris and placed him under formal investigation in December for suspected corruption in Tokyo's successful bid to host the 2020 Summer Games.

Takeda, who was president of the 2020 bid committee, said during a JOC board of directors meeting in Tokyo he would step down and not seek re-election.

At a news conference later on Tuesday, Takeda said: "I don't believe I've done anything illegal."

When asked why he had not resigned with immediate effect, Takeda said: "It pains me to have created such a fuss, but I believe it is my responsibility to serve out the rest of my term."

Takeda had been head of the JOC since 2001 and his resignation leaves a cloud hanging over both the national committee and the organisers of the Tokyo 2020 Games.

"I feel very bad that I'm causing a disturbance to the public like this ahead of next year's Games in Tokyo," said Takeda. 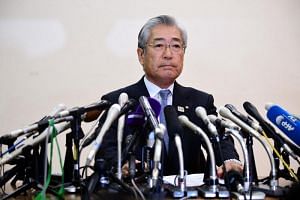 "I thought about the JOC's future and I have come to a conclusion that it is most appropriate to pass the JOC onto younger leaders that will bear the next generation, letting them create Japan's new era through the Tokyo Olympics."

"We are aware of JOC President Takeda's announcement today that he will step down from his position in June. We understand that president Takeda made his own decision," Tokyo 2020 said in an e-mail to Reuters.

"Details have not been made clear yet, so we would like to refrain from making further comments."

Takeda serves on Tokyo 2020's Executive Committee but it remains unclear whether he would also be standing down from this role.

French investigators have led a years-long probe into corruption in athletics and in early 2016 extended their inquiry into the bidding and voting processes for the hosting of the 2016 Rio de Janeiro and the 2020 Tokyo Olympic Games.

Multi-million dollar payments made by the Tokyo bid committee to a Singapore consulting company are under examination and Takeda is suspected of paying bribes to secure the winning bid.

Takeda has denied any wrongdoing, saying that there was nothing improper with the contracts made between the committee and the consultancy and that they were for legitimate work.

"I'd like to put my efforts into proving my innocence," added Takeda on Tuesday, who will officially step down when his presidency ends on June 27.

Japanese media have reported that former Olympic judo champion Yasuhiro Yamashita and Japan Football Association President Kozo Tashima, both JOC Executive Board members, could be in line to take over.

The IOC's ethics commission has opened a file on Takeda, who chairs the body's marketing commission. Takeda has been a member of the IOC since 2012.