RIO DE JANEIRO - Lee Chong Wei suffered heartbreak at the Olympics again as he found himself falling at the final hurdle for the third straight Games.

This is Lee's third straight silver medal at the Olympics, having been beaten twice before by China's Lin Dan, who finished fourth after being shocked 15-21, 21-10, 21-17 by Denmark's Viktor Axelsen in the bronze-medal play-off.

Chen and Lee had met 25 times before the final, with Lee taking the slight edge with 13 wins. But Chen's aggressive play kept Lee on the defensive for much of the final. The Malaysian also appeared to tire fast in the second game, at one point allowing Chen to string six straight points together.

Said Chen: "The men's doubles gold medal yesterday was China badminton's first in Rio. It gave me a lot of motivation and confidence and my result today has everything to do with my team-mates' performance yesterday." 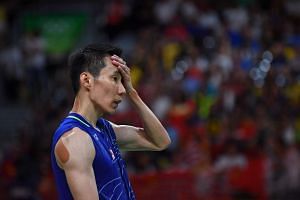 In the mixed doubles final, Chan Peng Soon and Goh Liu Ying were beaten by Indonesia's Ahmad Tontowi and Liliyana Natsir, which means Lee's loss is Malaysia's third defeat in a badminton final in Rio.

And so its wait for its first-ever Olympic gold will continue. The country will still finish the Rio Games with its best-ever haul at the Olympics, with four silvers (badminton, diving) and one bronze (cycling).

Lee had been touted by many as the pre-match favourite, after he beat arch-nemesis Lin for the first time in a major tournament in the semi-finals.

At 33, this is likely to be Lee's last shot at winning the Olympic gold. One of the sport's most dominant players, he has yet to win a title at the highest level. He is widely expected to retire by the time the next Olympics in Tokyo take place in 2020.

Back home, Malaysian Prime Minister Najib Razak said he was "proud of him" despite the loss.