RIO DE JANEIRO (Reuters) - Nine Australian Olympic athletes detained then fined over an incident at the Rio Games risk missing their flight home, a team official said on Sunday, a final frustration for a team that has experienced many headaches and a disappointing medal count.

The nine athletes were detained, collectively fined 90,000 reais ($38,000) and had their passports seized after entering the basketball arena without proper accreditation on Friday night.

The Australian team's charter flight leaves on Monday, but police are still holding their passports, Australian Olympic mission chief Kitty Chiller told reporters, adding that it was still unclear how and when they could reclaim the passports.

"It is actually not physically possible to have the fine paid and the passports delivered tomorrow," Chiller said, noting that Rio would be closed on Monday for a public holiday.

Rio police could not be immediately reached for comment. 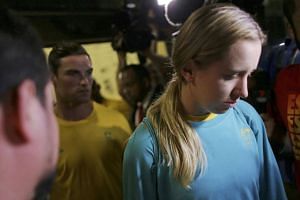 The Australian team has had a troubled Games, starting with complaints over the standard of their accommodation, theft and a small basement fire. One of their swimmers was mugged a few days before the nine athletes were detained. The team also returns home with a disappointing medal count.

Chiller said that if the passports were not returned in time, the charter flight would leave without the nine athletes and that a second flight would be arranged for them.

The Australian Olympic Committee is investigating the accreditation problem but Chiller has said the athletes were not to blame.

"I'm embarrassed that they had to go through that," she said. "Security was a massive challenge, transport had its problems ... At every level this has been an enormously difficult Games to deliver."