RIO DE JANEIRO (AFP) - After losing the last two finals, Brazil reclaimed the Olympic men's volleyball gold medal with a 3-0 victory over Italy at the Maracazinho in Rio on Sunday.

Watched on by football star Neymar, the volleyball team made it a golden double following the Selecao's penalty shoot-out victory over Germany in the next door Maracana stadium on Saturday night.

The United States beat Russia 3-2 in the battle for bronze between the last two Olympic champions.

Led by 20 points from the tournament's top scorer, the impeccable Wallace, Brazil avenged a 3-1 pool stage defeat to the Italians, who have never won Olympic gold, losing in the final three times now.

It was a fourth final in a row for Brazil, who also beat Italy in Athens in 2004 before losing to the US in Beijing and suffering a Russian comeback four years ago in London after leading by two sets to nil.

Despite the presence of 2.09-metre tall giants Lucas and Souza, it was the relatively diminutive 1.96m Lipe who rose to get the crucial block on the final point and send a packed home crowd into party mode. 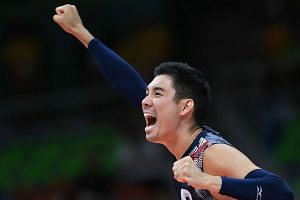 Olympics: US men fight back to down Russia for bronze volleyball medal

Italy started fast and opened up an early three-point lead but by the midway point of the first set, Brazil had pulled out a four-point gap over their error-prone opponents.

Italy had been more than twice as efficient as Brazil in spiking but their errors proved costly with their patchy display summed up by Ivan Zaytsev ploughing his serve into a team-mate on set point.

It was a high-powered affair with serves reaching up to 120km/h while a fiercly partisan home crowd ensured the atmosphere at the Maracazinho was rocking - and pretty hostile towards Italy.

The second set saw a reversal of fortunes in one respect as Brazil's error count ratcheted up, yet they vastly improved their spiking accuracy, which at the midway point was more than three times better than in the first set.

It was neck and neck with each side saving two set points until a mistake by Filippo Lanza on a serve reception gifted Brazil a two-set lead.

Having been unable to win a first set against opponents with a lamentable spiking accuracy of under 15 per cent and blowing two set points in the second, one with a serve into the net, Italy could have been forgiven for letting their heads drop.

Yet they rallied, their spiking efficiency reaching an incredible 70 per cent at one point in the third set.

But it wasn't enough as Brazil hung in and with Wallace inspired, Lipe got the vital block to win back the gold medal.