SINGAPORE - Singapore netball captain Charmaine Soh is, by her own admission, soft-spoken. But she will need to speak loudly and boldly over the next week as the Republic take on some of the sport's biggest stars with a team of fresh faces at the Netball World Cup.

Ten of Singapore's 12-member team are making their World Cup debuts in Liverpool, with the exception of Soh and mid-court player Kimberly Lim.

While the tournament may not be foreign to Soh, who featured in the 2011 and 2015 editions, taking on the role of captain this year has required some adjusting to.

It is her first time captaining the team on the international stage, taking over from Vanessa Lee, who took a break from netball in October 2018.

The 29-year-old Soh, who was previously the co-vice-captain of the team, even sought advice from former captain Micky Lin and veteran Premila Hirubalan and was reminded not just to think for herself but for the team.

She said: "I'm quite a soft-spoken person. Even as the vice-captain, I would leave to the captain to talk about the important things.

"As a player, you just think about having fun, but now I have to think twice. Now, I have to try and lead by example and be a role model."

Coach Natalie Milicich also acknowledged the challenges ahead of her team, saying: "There's a bit of nervousness around it.

"We've only had two players who've played at this level before so there is a bit of anxiousness and nervousness, but we're trying to look at it one game at a time."

Unlike the regional tournaments like the 2018 Asian Netball Championship - in which Singapore finished second to Sri Lanka - the level of play at the World Cup is much higher. 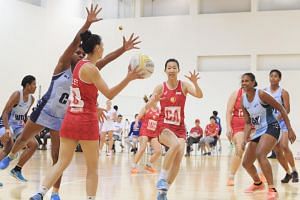 The pace of the game is much faster, with many more high, lob and fast balls as compared to what they are used to at regional tournaments.

The players are also of a bigger physique, which will require different tackling styles from Singapore.

To prepare themselves for it, the team have been carrying out video analyses of their opponents to identify their strengths and weaknesses. The lead-up to the tournament has been spent practising set plays and strategies to contain their opponents.

Singapore, ranked 26th in the world, will face Barbados (No. 11) in their opening fixture on Friday (July 12), before taking on ninth-ranked Malawi and world No. 4 New Zealand in the following two days.

Milicich knows that it will be a challenging first game but has faith that her charges can put up a good fight.

The New Zealander said: "If we play to our potential, we can certainly get a win.

"It will be tough because obviously Barbados are ranked a lot higher than us but anything can happen."