SINGAPORE - Coming off three losses on the trot, Singapore mixed martial arts (MMA) fighter Amir Khan is desperate to turn his fortunes around.

Having spent the last six months reflecting on his losses since his last defeat to Turkish grappler Saygid Arslanaliev, the 25-year-old believes he has found the answer to get back to winning ways.

Keeping his mind and body relaxed will be key as he heads into a fight against Malaysia's Ev Ting at One Championship's Edge of Greatness event at the Indoor Stadium on Friday (Nov 22).

Khan has been meditating up to three times a day for 10-15 minutes each session.

"I just put on my headphones and shut the world out," said Khan, adding that he has also tried to "spar loose".

"It's almost like playing the (arcade) game Street Fighter, I just do whatever move I feel I want to do, and just have fun. After all, MMA is my passion and if I'm not having fun, what's the point?"

Before the three straight losses , the Singaporean lightweight fighter racked up an impressive 11 wins - with 10 coming via knockout or submission - in 14 professional fights, earning him a shot at the One Championship lightweight title in November 2018.

But Khan, who made his professional debut in 2014, then suffered an unanimous decision loss to Filipino fighter Eduard Folayang in the title bout. This was followed by defeats by Costa Rican fighter Ariel Sexton in February 2019, and Arslanaliev two months later, both in One's lightweight grand prix tournament.

The three losses left Khan reeling and after returning to the drawing board, he realised his approach to preparing for fights had changed because he wanted to live up to his billing as a knockout artist. 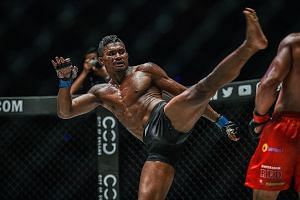 He explained: "Everyone started expecting it from me so I thought I had to go into fights all intense, aggressive, and go in for the kill... But I got carried away.

"People couldn't really see it, but I felt tension throughout my entire body as I approached the fights. And that's not how I perform. I am at my best when I'm relaxed and loose."

Khan's teammate at the Evolve MMA gym he trains at, One's female atomweight champion Angela Lee, believes he has what it takes to rebound against Ting.

Lee is in town to support her husband Bruno Pucci, who will face Japanese fighter Shuya Kamikubo in the Edge of Greatness undercard.

Lee, who halted her own two-fight skid by retaining her title against Chinese fighter Xiong Jingnan in Tokyo last month, said: "I can speak from experience that losses can get a fire going in you that maybe you wouldn't have if you were on a continuous winning streak.

"I know the losses were hard for Amir to deal with but he needs to try not be discouraged... and it sounds like he has managed to take the time to clear his head.

"He's looking to end the year on a good note... so I'm very excited for him."

Khan is relishing his shot at redemption against Ting, 30, who has a record of 17 wins and six losses.

Khan said: "I'm expecting him to bring fireworks. He's a tough, durable guy and I expect he will come try and tear my head off.

"But I'm hungry for redemption and this time, I've had time to prepare for a specific opponent and come up with a specific gameplan.

"People will see that the Amir in the last few fights, and the Amir on Friday night, will be completely different."