KASPIYSK (AFP) - Russia's Khabib Nurmagomedov said he had "shut up that dimwit" Conor McGregor as he lapped up a hero's welcome on his return to his native Dagestan following the successful defence of his UFC lightweight crown against the Irishman.

"Khabib! Khabib!" a crowd of some 20,000 fans chanted to welcome the unbeaten champion in an arena in the town of Kaspiysk, 14km from Dagestan's main city of Makhachkala.

Excited by Nurmagomedov's appearance, hundreds of his compatriots broke through lines of stewards and pushed their way onto the pitch, trying to get as close as possible to the champion.

"Thank you, brothers," replied Nurmagomedov, who showed off his champion's belt to the crowd.

On Saturday (Oct 6), Nurmagomedov defended his Ultimate Fighting Championship world title after putting McGregor in a brutal chokehold and forcing the Irish superstar to "tap out" during a fourth round submission.

It took his unbeaten professional record to 27-0 and 11-0 in UFC bouts.

"I'd prayed to the Almighty every day not to have injuries, for it all happen," Nurmagomedov said. 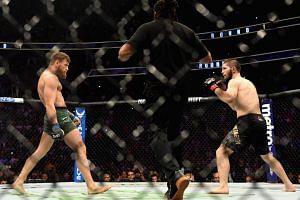 Is MMA a sport? Is bridge? Everyone has their own view

Ugly incident a black eye for the sport

"I wanted to shut up that dimwit up to prove the difference between our people and his people.

"Nobody can break us, our people have a great history," he boasted.

Although eventually awarded his championship belt, the Russian is still awaiting confirmation of whether he will receive US$1.5 million (S$2 million) prize money following a post-fight fracas that saw him jump over the octagon and attack one of McGregor's training partners, Dillon Danis.

A dramatic free-for-all ensued, with members of Nurmagomedov's entourage jumping into the octagon to attack McGregor as stunned officials battled to restore order.

It proved a dramatic climax to weeks of media posturing between the bitter rivals, during which the brash Irishman stoked the flames through a series of insults about Nurmagomedov's family and his Muslim religion.

As security tried to quell the chaos in the crowd, the exhausted McGregor eventually departed in a huddle of security personnel.

Nurmagomedov was also hustled out surrounded by security officers as the pro-McGregor crowd jeered and threw drinks at him.

The UFC chief Dana White refused to hand Nurmagomedov his belt in the Octagon, saying he feared it would further inflame the crowd.