SINGAPORE - For the first time in One Championship's history, two of its reigning women's champions will face off on Sunday (March 31) with the mixed martial arts promotion's strawweight world championship on the line.

And both Angela Lee and Xiong Jingnan have promised to deliver fireworks in Tokyo's Ryogoku Kokugikan indoor arena ahead of the upcoming One: A New Era event.

Speaking at a press conference in the Japanese capital on Thursday, Lee, 22, said: "I'm so excited for Sunday. This match-up has been in the making for a while now. Last November, unfortunately I had a back injury. Fast forward five months, here I am.

"This is the biggest event for One by far and I guarantee that on March 31, history will be made."

Xiong, a 31-year-old Chinese, agreed and said: "Angela and I will provide you with a very exciting match.

"For this match, I will be meeting a very tough opponent. But I am fighting to be the best and for honour. I want to prove that I am the strongest. I have faced many difficulties, but I believe in myself, the fans believe in me and their support will be my biggest motivation."

The bout between Xiong and Lee, who holds American and Canadian passports and has a Singaporean father, is the co-main event for One's glittering show in Tokyo. 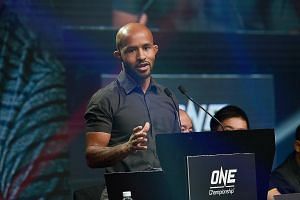 Lee, whose ring name is "Unstoppable" owing to her perfect 9-0-0 record, was originally slated to face Xiong, also known as the "Panda" and has a 4-0-0 record in One, in Singapore on Nov 9 but had to withdraw owing to a back injury.

The grappling expert added: "I believe in my coach and my team. We have a solid plan for Jingnan.

"Her style matches my style. She's very aggressive. We will meet in the middle of the cage and let's see what happens."