Leicester City have completed one of sport's unlikeliest title triumphs.

Given a 5,000-1 chance at the beginning of the season to lift the English Premier League crown, Claudio Ranieri and his merry men defied the odds to charm fans with the greatest fairytale in the sport. Just last year, the team struggled with relegation and this campaign, were mired in a pre-season sex scandal involving some of their players.

To give one an idea of how improbable bookmakers thought the Foxes would be champions, the possibility of American celebrity Kim Kardashian becoming president of the United States was 2,000-1. That American singer Elvis Presley, who died in 1977, is actually alive was also more likely at 2000-1.

The Foxes now join an elite group in the world of sport who stunned many with their titanic triumphs. Here are 10 others with similar feats:

Before there was the cheerful and funny Ranieri (Dilly ding! Dilly dong!), there was "Old Big'Ead" Brian Clough, the larger-than-life former manager of Nottingham Forest.

The late Clough, who died in 2004, led Forest to promotion to the old First Division (the precursor to the EPL) in 1977.

By the end of their first season in the top tier, they clinched the championship and entry into the European Cup (the forerunner of the Champions League).

To prove that it was no fluke, Forest won the European Cup again for a second straight year in 1980. This league win had long been considered the greatest triumph in football - until the Foxes 2016 feat.

The outsiders, at 150-1 odds to win the football tournament, started with a real bang by beating hosts Portugal 2-1 in their opening match in Porto, stunning a star-studded side that included Cristiano Ronaldo, Luis Figo, Deco and Rui Costa.

Coached by German Otto Rehhagel, the Greeks barely scraped out of their group on goal difference but once they are in the knock-out stages, their sheer tactical discipline, soaking up the pressure and hitting back through set-pieces, helped them to a most improbable triumph.

France (quarter-final), the Czech Republic (semi) and Portugal again, in the final, all suffered similar 1-0 defeats as Rehhagel left his mark by moulding a team of disparate talents like goalkeeper Antonios Nikopolidis, captain Theo Zagorakis and striker Angelos Charisteas and turned them into European champions.

Denmark's national players were well on their way to their summer holidays when they were hastily reassembled to play in Euro 92, hosted in Sweden, as finalist Yugoslavia was barred from playing due to the civil war going on then.

Playing without pressure and expectations, the jolly Danes qualified second from their group, beating mighty France along the way. In the semi-final, they shocked a Netherlands team packed to the brim with exquisite talents in the form of Ruud Gullit, Marco van Basten and Dennis Bergkamp.

But Peter Schmeichel and gang saved their best for last by humbling reigning world champions Germany 2-0 in the final. Almost a quarter of a century later, Schmeichel's son, Kasper, can now boast of his own victory against all odds. 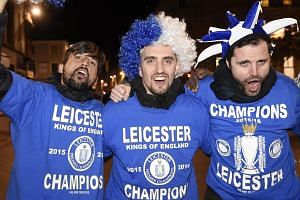 Italian football has long been dominated by the trinity of Juventus, AC Milan and Inter Milan, who scooped up 68 of the 100 Serie A titles since the league's inception.

But in 1985, little Verona became champions of Italy. And this came during a time when the big clubs all had world-class stars, like Diego Maradona at Napoli, Michel Platini at Juventus, Falcao at Roma and Zico at Udinese.

This is the team that made 200,000 people in the stadium cry and many millions more outside the ground.

When Brazil hosted the 1950 World Cup, the samba boys were heavily favoured to win the Jules Rimet Trophy for the first time, especially with stars like Zizinho and Jair starting up front. Celebratory songs were already written. But Uruguay dared to attack inside the Maracana and were rewarded with a 2-1 win.

The scorer of Uruguay's winning goal and the last surviving member of either team, Alcides Ghiggia, died on July 16 last year at the age of 88. Poetically, he died on the 65th anniversary of the day he silenced the whole of Brazil.

At 42 and ranked 111th in the world, Northern Irishman Darren Clarke had no business winning The Open. The golfer was 125-1 to win the title. But he would complete an amazing four days to win the Claret Jug by three strokes from Phil Mickelson and Dustin Johnson.

The win made him the oldest Open champion since 1967.

American golfer Ben Curtis came into the tournament as a 300-1 outsider. He would leave it as the first golfer since Francis Ouimet in the 1913 U.S. Open to win his major championship debut.

He edged out Thomas Bjorn and Vijay Singh to win the event by one stroke.

At 396th in the world, he was the lowest-ranked player to win a major since official world rankings were first calculated.

Croatian Goran Ivanisevic was a mere wild-card entry to the tournament. Ranked 125th in the world, he was not given an automatic berth, but got in because he was a three-time runner-up (1992, 1994 and 1998).

He beat Pat Rafter to win his only Grand Slam title, a feat which bookmakers had given a 150-1 odds to happen.

The St. Louis Cardinals baseball team were a big doubt for the playoffs as they trailed the Atlanta Braves by 4.5 games in the wild-card race on Sept 12, with 15 games to play.

They were given 500-1 odds to with the National League title and 999-1 odds to win the World Series. Yet they went on a 11-4 run to make the playoffs at the expense of the Braves.

En-route the the title, they beat the Philadelphia Phillies in the division series and the Milwaukee Brewers in the National League Championship Series. In the World Series against the Texas Rangers,they were down to their last strike twice in Game Six before somehow fighting back to force a Game Seven and win the title.

Twelve years before the Cardinals did the improbable, it was the Rams, a gridiron football team, who were the darlings of St. Louis.

At 300-1 odds to win the Super Bowl, an unlikely win became even more unbelievable when likely first-choice quarterback Trent Green suffered a season-ending knee injury in the pre-season. That left Kurt Warner, a National Football League reject who plied his trade in the Arena Football League, as their starter.

Yet the rams, under Warner's offensive strengths, would make the playoffs for the first time since 1989.

The team topped the charts in almost all categories that season, among them most points scored, least points conceded, most yards earned, least yards lost and most games won. That the unlikely champions won 12 games over the course of the season by 16 points or more has lead many to hail them as one of the greatest Super Bowl champions of all time.