SINGAPORE - She created history on the US LPGA Tour last year when she swept the season-ending honours - the first golfer to do so.

World No. 1 golfer Ariya Jutanugarn clinched the Annika Major Award for the best record in all five Major championships, the Player of the Year award, the Vare Trophy with a scoring average of 69.415, and topped the money list with US$2,667,983 (S$3.6 million).

The all-conquering Thai also won the Race to the CME Globe and its US$1 million bonus, and set single-season records for rounds in the 60s (57) and birdies (470).

Even as the 23-year-old looks to have the golfing world under her feet, she still has unfinished business in her own backyard.

Her 10 LPGA Tour wins in the last three years included the 2016 Women's British Open and the 2018 US Women's Open but she has never won an LPGA Tour event in Asia.

As the LPGA Tour heads to Chonburi (Honda LPGA Thailand) and Singapore (HSBC Women's World Championship) this month, she told The Straits Times in an e-mail interview: "Obviously, I would love to win in my home country before I come to Singapore, but I would certainly like to add a win in Asia at some point soon!"

Ariya is no stranger to breaking barriers. She was the youngest to qualify for an LPGA Tour event when she made the 2001 Honda LPGA Thailand at 11, before becoming the first Asean player to win a golfing Major at the 2016 Women's British Open. 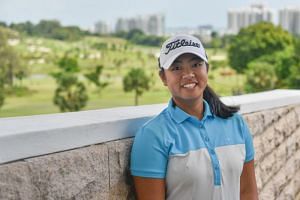 Golf: Top 20 in rankings all ready for HSBC Women's World Championship in Singapore

But it was not always smooth sailing. As a rookie in 2015, she missed 10 straight cuts on the Tour before her breakthrough 2016 season in which she won her first Major and four other events.

Even then, she went on to miss the cut in four out of five Majors.

Ariya's achievements have come with great expectations every round and every week, and she did not always know how to deal with it and would sometimes break down on the course. These days, she tries to unwind off the course with Thai music and drama, while smiling as much as possible on it.

She said: "It is well documented that I had a tough first year and, while it was difficult at the time, it made me stronger mentally and more appreciative of success. A few years ago when I played well, I would just be lazy and not practise.

"There's a lot nobody knows... The feeling I had in 2017 was the worst place you can be. I felt like I couldn't be proud of myself because I didn't try to do anything different.

"But this never happened (any more) because I know I still want to improve. And what can make me proud is when I work hard and practise.

"This year, I have been working hard on my attitude and good self-talk on the golf course and that will continue to be a focus with my coaches Pia (Nilsson) and Lynn (Marriott)."

Over the years, there have been many women golfers such as Lorena Ochoa, Ai Miyazato, Shin Ji-yai and Tseng Ya-ni who retired early or faded into oblivion after reaching the top.

Ariya is determined to be the world's best woman golfer for as long as she can.

"I can only keep doing what I can do to stay healthy and focused," she said. "The quality of players on the LPGA is growing every year, which is great for the Tour, and I know I have to keep getting better.

"Last year was fantastic, but we all start a new season at the same place and I need to keep focusing on improving and not worrying about wins.

"I want to keep playing as long as I am still enjoying it. It is great being on Tour with (older sister) Moriya, which makes life on the road a whole lot better, but my focus is towards continually improving and being the best player and person I can be."

The HSBC Women's World Championship will be held at Sentosa Golf Club's Tanjong Course from Feb 28 to March 3. Day passes from $22 are available at apactix.com