LOS ANGELES (AFP) - More than two weeks after Kobe Bryant died in a helicopter crash, Tiger Woods is among those who find the shock may have worn off but disbelief remains.

"It's hard to put into words what transpired and the fact that it's a reality," 15-time major golf champion Woods said on Tuesday (Feb 11) at Riviera Country Club, where he is preparing to tee off on Thursday in the Genesis Invitational.

"Part of me thinks that it's not real."

The 41-year-old Bryant, a retired NBA legend with the Los Angeles Lakers, and his 13-year-old daughter Gianna were among nine people killed in the Jan 26 crash in the Santa Monica Mountains west of Los Angeles.

They were on their way to a girls' basketball tournament at Bryant's Mamba Sports Academy in suburban Thousand Oaks - not far from Sherwood Country Club, which hosted Woods's Hero World Challenge tournament for years.

Woods learned of Bryant's death just after he completed his final round at Torrey Pines that Sunday.

The 15-time major champion, who said he grew up a "diehard Lakers fan," noted that he turned pro the same year that Bryant was drafted into the NBA to start a 20-year career that would include five titles with the Lakers.

"I don't really know what I said post-round," Woods said on Tuesday.

"I was in shock just like everyone else, trying to put it in words going forward."

"The reality of the situation is Kobe and Gigi are not here, but it's hard to accept," Woods continued.

"People who are close him and all the families, it's just hard to accept that reality." 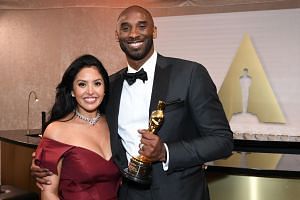 NBA: Kobe Bryant's wife Vanessa wishes 'this nightmare would be over'

Bryant's widow, Vanessa, has announced a public "celebration of life" for Kobe, Gianna and the other crash victims will be held on Feb 24 at Staples Centre arena.

But even as such plans go forward, Vanessa Bryant took to Instagram on Monday to express her own struggle to come to terms with her family's loss.

"My brain refuses to accept that both Kobe and Gigi are gone," she wrote.

"I can't process both at the same time. It's like I'm trying to process Kobe being gone but my body refuses to accept my Gigi will never come back to me. It feels wrong... I'm so mad. She had so much life to live."