MIAMI (AFP) - Reigning Masters champion Tiger Woods committed on Wednesday (July 31) to playing in US PGA Tour play-off events the next two weeks, hoping for the chance to defend his Tour Championship title.

Woods, a 15-time Major champion chasing the all-time record of 18 Major wins by Jack Nicklaus, tweeted that he would play in the Northern Trust at Liberty National in suburban New York next week and the BMW Championship at Medinah near Chicago in two weeks.

"Ready to begin the FedExCup playoffs starting with @TheNTGolf and then the @BMWChamps. Hope to see you there," Woods tweeted.

The 43-year-old US star has won 81 US PGA titles, one shy of the career record set by Sam Snead.

Woods, a two-time winner of the US PGA play-off crown, stands 27th in the season points standings, at risk of not cracking the top 30 who qualify for the season-ending showdown at East Lake in Atlanta.

The top 125 players on the season points list after this week's Wyndham Championship in Greensboro, North Carolina, will secure 2019-20 US PGA berths and advance to the three-event playoffs. From a field of 125 at the Northern Trust only 70 advance to the BMW and from there only 30 reach the Tour Championship. 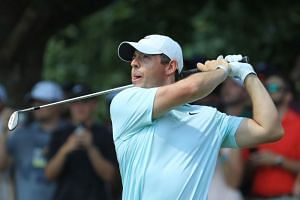 If Woods plays at the Northern Trust and BMW events in consecutive weeks, it will be the first time he has played in back-to-back weeks since February at Riviera and the WGC Mexico Championship.

Should he then attempt to defend his crown in the Tour Championship, it would be the first time he has played three weeks in a row since last year's play-offs.

Woods has played a very limited schedule since capturing his fifth green jacket last April at Augusta National, snapping a major win drought dating to 2008 and serving notice he had completed his fightback following multiple back surgeries.

Since the Masters, Woods has played only this year's three other major tournaments and the Memorial, a Nicklaus-hosted US Open tuneup event. In his most recent start, he missed the cut two weeks ago at the British Open at Royal Portrush in Northern Ireland.