SINGAPORE - Local golfer Quincy Quek is leading as the top Singaporean player on the first day of the rain-soaked SMBC Singapore Open.

The 29-year-old, who became a father last Saturday (Jan 14), signed for a three-under 68 to place himself on tied-sixth spot so far in the first round of the US$1 million (S$1.42million) tournament on Thursday (Jan 19).

He is currently tied for sixth spot with Gaganjeet Bhullar of India, Jbe Kruger of South Africa, Migeul Tabuena and Antonio Lascuna of the Philippines, Toshinori Muto and Tadahiro Takayama of Japan. Leaders Hideto Tanihara of Japan and Kang Kyung Nam of South Korea are joint leaders on six-under 65.

It's been more than just golf for Singapore's @quincyquek..
Find out what the new daddy has to say after signing for a 68 at @SingOpenGolf pic.twitter.com/o35KfcpuyL

Play was suspended at 3.29pm due to lightning and resumed at 5.55pm. 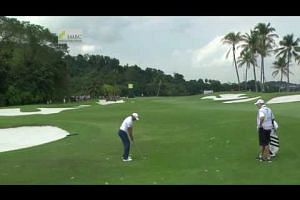 Despite not getting much sleep before teeing off at the Sentosa Golf Club on Thursday morning, Quek was happy with his performance. His best finish at the Singapore Open was a joint-33rd placing in 2007 as an amateur.

He said: "I played pretty solid overall, making a few 10-footers and par saves. The round could have gotten away from me. But I managed to keep my head in the game.

"I haven't slept much since she (my daughter) was born, so I've lost track of time. But I'm coming into this event without any expectations. My first round was good and I've put myself in a good position."