SAINT-QUENTIN-EN-YVELINES, France (REUTERS) - Europe head into the final day of the 42nd Ryder Cup with Jim Furyk's American side exactly where they want them after stretching their lead to a commanding 10-6 on Saturday (Sept 29).

Thomas Bjorn's men began the day 5-3 ahead, ended the morning fourballs 8-4 to the good and consolidated their advantage during the foursomes despite American resistance.

Over the opening two days there have been few chinks in the European armour with Anglo-Italian pairing Tommy Fleetwood and Francesco Molinari leading the onslaught.

Sent out again by Bjorn, they combined to inflict two crushing defeats on 14-times major champion Tiger Woods on Saturday as the American's miserable weekend continued.

Fleetwood, one of five rookies in Bjorn's dozen, is the first European debutant in Ryder Cup history to win his first four matches while his union with this year's Open champion, already nicknamed Moliwood, is the first from Europe to win maximum points from the first two days.

"They were phenomenal," Bjorn said.

Stunning cameos from Sergio Garcia, Rory McIlroy, Paul Casey and another rookie, Tyrrell Hatton, mean Europe are 4.5 points from regaining the trophy they lost at Hazeltine two years ago. 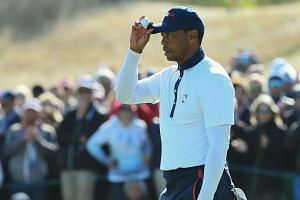 Only twice has a side overturned a four-point deficit on the final day although a draw would retain the trophy.

"We need a big couple of points early on, and then the pressure moves solely on to them," said Spieth, who has three points from four matches here with Thomas.

"If we can get two or three points early, it gets to be quiet and uneasy around here. That's the goal."

It would take more than that to silence the raucous crowds that swarmed to the Parisian countryside, serenading their heroes as the putts dropped and iron shots stung the greens.

But while Bjorn admitted he is "really, really, really" happy with the first two days, he knows it is not over - pointing to Europe's "Miracle in Medinah" in 2012 when they overturned a four-point deficit on the Sunday to stun the Americans.

"You think of Brookline, Medinah and plenty of other examples where scorelines don't mean much," the Dane said.

"This is probably the most important 18 holes ahead of these 12 players for a long time."

Incredibly, Europe had trailed 3-1 after Friday's fourballs, before a barnstorming sweep of the foursomes.

Furyk picked exactly the same pairs for Saturday's fourballs - players with 23 major titles between them - but this time, with a teasing north-easterly wind up across Le Golf National, they could barely locate a fairway or green.

McIlroy and Garcia withstood a fightback by Brooks Koepka and Finau for a 2&1 victory - Spain's Garcia nailing it with a stupendous 25-foot birdie on the 17th that provoked an eruption of roars aross the course.

Casey's red-hot putter helped him and Hatton to a comfortable 3&2 win against Dustin Johnson and Rickie Fowler, and Woods was given little support from Patrick Reed who spent most of his time hacking through knee-high rough in a 4&3 loss to Fleetwood and Molinari.

When Woods lost again later it was his 19th defeat in 29 fourballs and foursomes.

Spieth and Thomas snapped a sequence of eight unanswered European points as they beat Poulter and Spanish rookie Jon Rahm.

Woods toiled away in the afternoon with Bryson Dechambeau but the magic was not there and he was powerless to prevent a 5&4 defeat by "Moliwood".

The US finally put some more red on the board, though, with Spieth and Thomas defeating Poulter and McIlroy 4&3 after losing the first two holes, and Bubba Watson and Webb Simpson getting the better of Garcia and Swede Alex Noren - a match in which the second hole was shared with triple-bogey sixes.

It left Garcia tantalisingly short of the one point required to take his tally past the 25 of all-time Ryder Cup points record scorer Nick Faldo.