MEMPHIS (REUTERS) - What loomed as a blockbuster "bout" between two four-time Major champions ended up a technical knockout as Brooks Koepka floored Rory McIlroy on the way to a three-stroke victory at the WGC-St Jude Invitational in Memphis on Sunday (July 28).

Koepka had McIlroy reeling with early blows in the final round and never eased up on his out-of-sorts rival at TPC Southwind as he underlined his status as world No. 1

The American sank a series of clutch putts and carded a five-under 65 for his first victory in the World Golf Championships series.

"I've been playing so well as of late and everything just kind of comes if you let it happen and stay patient," said Koepka.

After starting the final round a stroke behind McIlroy, Koepka finished at 16-under 264, notching his third PGA Tour victory outside the Majors.

On top of the US$1.745 million (S$2.39 million) winner's cheque, he also picked up a US$2 million bonus as winner of the regular-season points race.

It was the first time Koepka and McIlroy had been paired in a final round, raising hopes of a day-long duel.

But McIlroy missed a short birdie putt at the third hole from inside four feet and never recovered. The Northern Irishman failed to birdie until the 14th hole in his round of 71 and finished equal fourth, five shots adrift of Koepka. 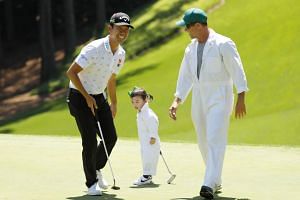 In Pictures: 'Bring your kid to work' day at Masters 2019

American Webb Simpson (64) claimed second place on 13-under, a stroke ahead of Australian Marc Leishman (67).

Koepka won the PGA Championship in May for his fourth Major in less than two years, and if not for an uncooperative putter, he might have challenged Shane Lowry at last week's British Open.

The 29-year-old hit a couple of loose shots early on Sunday but chipped and putted precisely, and three birdies were enough for a three-shot lead over McIlroy at the turn.

"These last few years have been unbelievable. It's been an incredible run," said Koepka, who spoke of his record of nine runner-up finishes.

"Every time I come second, I'm learning something, watching the guy who wins if I'm playing with him, or trying to figure out how I handle shots under pressure.

"I've come into my own, figuring out my game, especially under the gun."