(Reuters) - Jack Nicklaus reckons his record of 18 Major championships will probably be broken by Tiger Woods as long as the former world No. 1 stays healthy through the later stages of his career.

Nicklaus, who is hosting this week's Memorial Tournament at Muirfield Village in Ohio, said on Tuesday (May 28) that Woods, who won his 15th Major at last month's Masters, will likely have to manage the aches and pain that affect athletes in their 40s.

"Who knows how long his body is going to stay together?" Nicklaus told a pre-tournament news conference. "When you've had as many operations as he's had, he may be solid enough that it's alright. And if he is I think he probably will break my record."

Nicklaus, 79, said he played a round of golf with Woods about a month before the Masters and that the 43-year-old looked great, but afterwards complained about a neck problem.

Woods, who will tee off in Thursday's opening round with Englishman Justin Rose and Bryson DeChambeau, can expect a lot more of those types of problems for the rest of his playing days, according to Nicklaus.

"When you get to be 43 years old you start getting a little creak here and another creak there," said Nicklaus. "We all have a lot of those problems. But if you manage them and you know how to pace yourself you can do that.

"He's at the age where he needs to pace himself and he can't just do everything everybody asks him to do. He's got to be a little selfish." 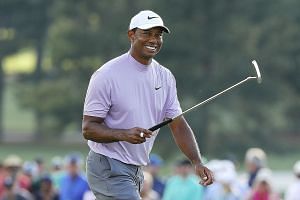 Like Nicklaus, Woods has unlocked the key to longevity

When Woods won at Augusta National, it not only proved many doubters wrong but revived talk about whether he would catch a record many considered safe, especially given the many false starts and setbacks he has endured over the years.

Nicklaus admitted he wanted to see his record stand the test of time but added that he hoped it was not because injuries ultimately prevent Woods from giving it a proper chase.

Nicklaus, who figured Woods has 10 years left competing in golf's four Majors, said winning the blue-riband events later in his own career was "just as easy" as during his younger years.

"I got lucky when I was 20 because talent carried me through there. At age 40 I had to be a little smarter because I didn't have the talent I had at 20."