SOUTHPORT, England (AFP) - Chinese prodigy Li Haotong caused a sensation in the British Open on Sunday as he shot a seven-under par 63 in his final round at Royal Birkdale to finish on six under par overall for sole possession of third place.

Li, 21, started the day at +1 for the championship and parred his first seven holes before a remarkable run of seven birdies and four pars in his remaining 11 holes.

It is just the 32nd round of 63 ever recorded in a major championship and just the 11th achieved at a British Open.

The score was the all-time low in a major until Saturday, when South Africa's Branden Grace broke new ground with an unprecedented 62 in the third round. 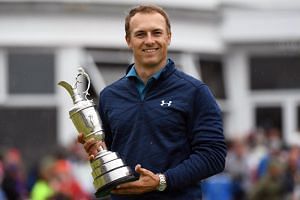 Overnight leader Jordan Spieth endured a shaky start to his final round but maintained a two-shot lead over nearest challenger Matt Kuchar after seven holes. Spieth started the day three shots clear on 11 under par but promptly bogeyed three of the first four holes while Kuchar birdied the 2nd to go to nine-under.

However, the nerves got to Kuchar as well and he dropped a shot at the 3rd before another bogey at the 6th to go back to -7 for the championship.

Spieth birdied the short par-four 5th and saved a par at the difficult 6th after a wayward tee shot to sit at -9. Behind them, China's

Li roared up to third on the leaderboard after his stunning round of 63 left him at six-under overall. England's Matthew Southgate and Australia's Marc Leishman both shot 65 to sit in the clubhouse at four under par.