SPA-FRANCORCHAMPS, Belgium (REUTERS) - Lewis Hamilton is preparing for a tough Sunday (Aug 28) slog in sweltering conditions as he bids to claw his way through the field at the Belgian Formula One Grand Prix.

The Mercedes driver will start from the last row or the pit lane after being hit with a 55-place grid penalty for exceeding his permitted allocation of engine-related components with three power-unit changes this weekend.

"It's going to be a very, very hard race," Hamilton told reporters after Saturday's qualifying session where he drove only a handful of laps, watching the rest of it in his shorts in his driver's room.

The Briton has long been aware he would have to take engine-related penalties at some point this year after suffering a spate of reliability woes earlier in the season. 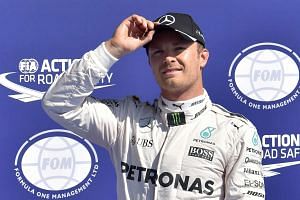 Formula One: Rosberg on pole for Belgian Grand Prix

Mercedes had already earmarked the 7km-long Spa track or Monza, venue for the Italian Grand Prix next weekend, as the tracks to take the penalties as both offer plenty of opportunities for overtaking.

But the uncharacteristically hot temperatures this weekend combined with high mandated tyre pressures have made conditions tricky for teams and drivers.

Triple world champion Hamilton, who has a 19-point cushion over team mate Nico Rosberg at the top of the drivers' standings, appeared relaxed though.

"It's been a vacation weekend," joked Hamilton who has focused his attention this weekend on race pace rather than flat-out qualifying blasts.

"We've kind of been chilling. Okay I've done lots of laps but not been out pushing for the car to be the quickest," he added as he munched on chocolate.