BUDAPEST (AFP) - Sebastian Vettel remained hopeful, if not confident, that he and Ferrari can bounce back and triumph at the Hungarian Grand Prix despite qualifying only fourth on Saturday (July 28).

The championship-chasing German looked to be sure of success until heavy rain affected qualifying and handed the initiative to Lewis Hamilton and Mercedes who secured a front row lockout.

"I don't think there was an awful lot missing, but we weren't quick enough," he explained.

"It was difficult in the wet and difficult to squeeze everything out of the car.

"I think the laps that I had were fine, but just not quick enough. In the wet conditions, we are not as confident as in the dry, so there's work to do.

"It was a tricky session and it could have been anything. I think in the dry, we were pretty much in control. Obviously, it wasn't dry this afternoon, so it wasn't meant to be.

"But we will see tomorrow. It's not easy. It's better if you start from first, but we're starting from fourth so we're focussed on winning from fourth." 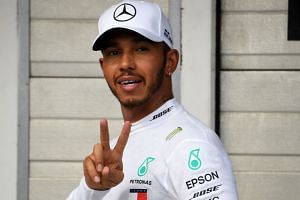 Formula One: Hamilton beats the elements to seize pole in wet Hungary, Bottas and Raikkonen behind him

Vettel was out-qualified by Ferrari team-mate Kimi Raikkonen for only the third time this year, but the Finn was also not happy.

"There was definitely a chance I could have put it on pole in these conditions," said Raikkonen, who has had eight podium finishes at the Hungaroring.

Hamilton leads Vettel by 17 points in the drivers championship.