Team boss Maurizio Arrivabene was more critical, saying Ferrari had made an 'unacceptable' blunder in the final phase of qualifying.

Ferrari, expecting rain, sent Vettel and team mate Kimi Raikkonen out on the intermediate tyres at the start of the final shootout phase of qualifying.

But the track stayed dry and forced the pair back into the pits to change on to the slick super-soft tyres.

The planning error cost Vettel dear, with spots of rain beginning to grease the track and leading him to make a mistake on his first flying lap. With the rain intensifying and drenching the track, he did not get another shot.

"I do not think that pole position was within our reach, but what happened today is unacceptable," Arrivabene told Motorsport.com.

"I am very angry. It is not the first time that these mistakes have occurred. I do not feel like pointing my fingers at someone in particular, but I'm very disappointed." 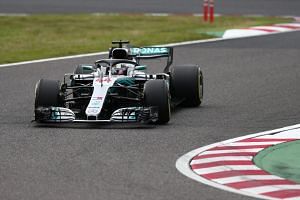 In contrast, Hamilton got it right from the start.

Vettel, also a four-times champion like his British rival, said the decisions were taken as a team and defended his colleagues.

"When the conditions are like this, then obviously you either get it right or get it wrong, so I'm not blaming anybody," said Vettel, whose title hopes looked slim already before Saturday.

"If it (had) started to rain five, six, seven minutes earlier, then we did a miracle because we were the only clever ones, but if it's like that, then obviously we're the only ones who look stupid.

Vettel trails Hamilton by 50 points with only four races to go after Sunday's Japanese round.

The Briton, winner of five of the last six races had always been favourite for pole having dominated practice but Vettel had looked competitive until the botched tyre choice.

"He has a fast car but obviously just fighting against Lewis if everything runs well with us, it's going to be difficult off the start."