SINGAPORE - Despite the haze threatening to ruin the party, this year's Singapore Airlines Singapore Grand Prix has proven to be a hit with spectators.

Race promoters Singapore GP announced on Sunday (Sept 22) that the 12th edition of the Singapore race drew a three-day total of 268,000 fans. This is the second-highest attendance after the 300,000 that attended the inaugural race in 2008.

It was also a slight increase from last year's total of 263,000, which is now the third-highest figure for the Formula One race in Singapore.

Singapore GP said in a statement: "With more than 130 hours of entertainment across 10 stages, innovative hospitality offerings, and exciting gastronomic experiences throughout the Circuit Park, the 12th edition of the Formula One night race drew 268,000 spectators to the Marina Bay Street Circuit over the three-day action-packed weekend."

Air quality readings in Singapore had alternated between the moderate and unhealthy range in the week leading up to the F1 race. At 7pm on Sunday, the 24-hour Pollutant Standards Index (PSI) for all regions was over 100, with the south recording the highest figure at 122, and the west the lowest at 109.

In the morning, at 8am, readings for the north, east, central and west regions were under 100. The south was at 105.

Among the first-timers to the F1 race here was Australian Joe Grech, 51, and his four other family members. He said: "The haze isn't that bad. It looks more overcast than anything and didn't ruin our experience at all."

The 12th edition of #F1NightRace drew 268,000 spectators to the Marina Bay Street Circuit over the three-day action-packed weekend. pic.twitter.com/dY6Pvkzjw2

Retiree Doris Liang, 72, and her husband James Ng, 74, both brought respiratory masks with them but were also unfazed by the haze. Liang said: "The haze makes me cough a bit but it's not a problem. I'll just drink more water."

In the south, where the Marina Bay Street Circuit is located, the one-hour PM2.5 concentration reading was in the "elevated" range of 69 at 7pm, compared with 101 at 8am. 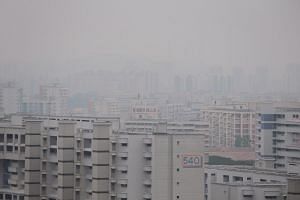 The one-hour PM2.5 concentration, which the National Environment Agency said is a better indicator of current air quality, measures the average hourly concentration of PM2.5 particles - the dominant pollutant during haze episodes - and is meant to help people gauge immediate activities, such as whether they should go for a jog.

The 2014 and 2015 editions of the Singapore Grand Prix were held in hazy conditions but both proceeded without major incident.

The previous 11 editions of the night race have brought in more than $1.4 billion in tourism receipts. In 2017, then Minister for Trade and Industry (Industry) S. Iswaran said the cost of hosting the race had decreased by about $15 million to $135 million.

Negotiations with F1's owners Liberty Media to extend the Singapore night race beyond the current 2021 deal are expected to begin next year.