BAKU (AFP) - Formula One was under fire from world champion drivers on Sunday (June 19) after this season's ban on in-race radio assistance influenced the outcome of the European Grand Prix.

Hamilton, who started 10th on the grid, finished fifth after losing engine power for 12 laps during the race while Raikkonen finished fourth, also after being refused information. 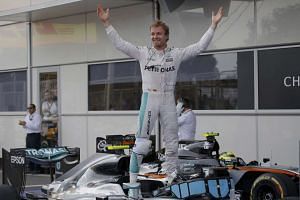 Hamilton's Mercedes team-mate Nico Rosberg won the race after overcoming a similar engine problem to Hamilton in the race.

Hamilton said he could not see the point in the radio ban as it wrecked his hopes of mounting a charge for a podium finish or better.

"I don't see the benefit," he said. "The FIA have made Formula One so technical, to have 100 or 200 different switch positions, and there's no way for me to know what the problem is."

"It's just a shame I could not race," he added. "I wanted to race and, if I had been able to fix it, I would've been part of the show and tried to catch the guys ahead.

"I had no idea. It was just low power. I didn't do anything - it just fixed itself. I then turned the engine down, as I was 14 seconds behind the guys at the front, with only seven or eight laps left - and 10 seconds in front of the guys behind me. I just saved the engine."

Mercedes chief Toto Wolff said both cars had problems with "a configuration with their switches."

He said: "There is a way of changing it on the dashboard, which we are not allowed to communicate to the drivers. It took a while for Lewis to reset.

"The reason why we have those radio regulations is we want more unpredictability and we don't want them to be engineer driven."

Raikkonen said: "You would think they are allowed to say 'yes' or 'no', but that's not the way it is."

After two successive wins had lifted him back into contention for a fourth title, Hamilton slipped back to 24 points behind Rosberg whose return to form brought him his 19th career victory.

Four-time champion Sebastian Vettel in a Ferrari took full advantage of an off-form day for Red Bull and drove steadily to finish ahead of Sergio Perez of Force India who passed Raikkonen on the final lap.

Valtteri Bottas finished sixth for Williams ahead of Australian Daniel Ricciardo and his Red Bull team-mate Max Verstappen with Nico Hulkenberg ninth for Force India and Felipe Massa 10th in the second Williams.

Rosberg now has 141 points in the title race and Hamilton 117.

"The weekend went perfectly for me, an awesome day," said Rosberg. "I'm ecstatic and I'm looking forward to the celebrations."