BUDAPEST (REUTERS) - Mercedes Formula One boss Toto Wolff ruled out making a move for Max Verstappen or George Russell on Saturday (Aug 3) and said Lewis Hamilton's 2020 team mate would be either Valtteri Bottas or Esteban Ocon.

Bottas, 30 this month, is in his third year with the dominant team and the Finn, winner of two races so far this year, gets on well with five-times world champion Hamilton.

French reserve Ocon, 22, is a highly-rated but less experienced talent who has had to sit on the sidelines this season.

"It's a question between Esteban and Valtteri," Wolff told reporters after Verstappen took his first career pole at the Hungarian Grand Prix, ahead of Bottas and Hamilton.

"We've been discussing it for a long time, within the team, and I've been wrestling with myself on what is the right thing for the team and for the drivers.

"In a way, both deserve the seat; Esteban because he has been through tough situations and certainly has the energy and the talent to be in a Mercedes.

"On the other side, Valtteri has the experience and has proven again how fast he can go and he's tremendously supportive developing the team with Lewis." 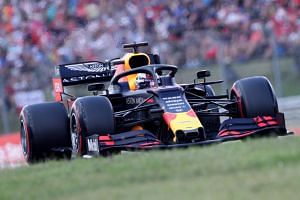 Wolff said the team, winners of both titles for the past five years, would get the Budapest weekend out of the way and decide over the August break.

The Austrian said he "would not sabotage Esteban's career" by blocking him from joining another team and some had expressed an interest in his services.

"I think he must be given the opportunity in Formula One, either with us or another team, and who knows what happens in two, three or four years down the line," he added.

Paddock speculation had suggested Mercedes might move for Verstappen but Wolff, who has always talked of the youngster in glowing terms, said the Dutchman was contracted and committed to Red Bull and he respected that.

Verstappen has won two of the last three races and is seen as a future champion.

British rookie Russell, at Williams but with a Mercedes contract, was last year's Formula Two champion and is also a major talent for the future.

Wolff emphasised, however, that he did not feel the 21-year-old was ready for Mercedes and should learn out of the limelight at Mercedes-powered Williams.

"I don't think that you are given the possibility to learn in a Mercedes," he said.

"You are being put in a car that is able to win races and championships in a high-pressure environment.

"I think it can go terribly wrong for a young driver that has the talent to become a world champion if he's thrown in that environment next to the best driver of his generation, who has been with us for seven years.

"And I wouldn't want to burn George."