SAO PAULO (AFP) - Lewis Hamilton has paid tribute to his Mercedes team-mate Valtteri Bottas and described their pairing as "the greatest" in Formula One history.

Speaking ahead of this weekend's (Nov 10-11) Brazilian Grand Prix, where Mercedes hope to clinch a fifth consecutive constructors' title, the new five-time champion added that Bottas had been fundamental to his successes.

"It's the greatest partnership in terms of respect and teamwork from drivers that I'm sure has ever existed in Formula One - probably.

"This year definitely there have been times when he has been fundamental in us winning races." Hamilton and Bottas need to score 31 points between them to end Ferrari's challenge for the team title at Interlagos where they have only a modest record.

Hamilton has had pole and won once in Brazil and Bottas secured pole position last year.

After being out-performed by a revived Ferrari in Texas and Mexico, the Mercedes pair will seek to regain the initiative from rivals Sebastian Vettel and Kimi Raikkonen.

If one driver wins and the other finishes in the top seven, Mercedes will triumph again, but if the scarlet Scuderia can continue recent form they have a chance to keep the championship alive into the final race in Abu Dhabi. 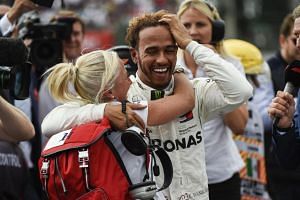 Ferrari outscored Mercedes by 12 points in Texas and by 11 in Mexico. If they can beat them by 13 in Brazil, it will maintain their title bid.

Much will depend on Hamilton's mindset and mood after clinching his fifth title.

In the two seasons in which he clinched the drivers' title before the season ended, he failed to win another race - so the presence of Bottas could be a critical factor for the team.

Since replacing 2016 world champion Nico Rosberg, Bottas has helped the team to win 21 races overall and gained total respect and trust from his British team-mate.

Hamilton has acknowledged that and also the importance of sealing another success for Mercedes.

"We have such a huge respect for each other," he said. "I see how hard he works. He sees how hard I work. We don't play games in between.

"In actual fact, we work together. There are times where I've figured something out in my set-up and I'll tell him and there are times that I can talk to him." Bottas is winless this year and has played a significant number two role in Hamilton's title triumph - a role that the Englishman would perform, he said, if their positions were reversed.