PARIS (AFP) - The number 17 car driven by Jules Bianchi was retired from future Formula One championships on Monday out of respect to the late Marussia driver.

F1's ruling body the FIA confirmed his car's withdrawal on their official website.

"As F1 car numbers are now personally chosen by each driver, the FIA believes it to be an appropriate gesture to retire Jules Bianchi's number 17.

"As a result, this number can no longer be used for a car competing in the FIA Formula One World Championship," a FIA statement read. 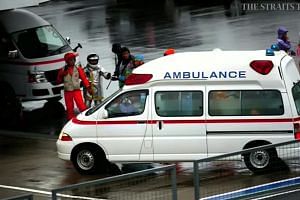 Bianchi, 25, had been fighting for his life under controlled medical conditions in the Centre Hospitalier Universitaire hospital in Nice, southern France.

He is the first Formula One driver to perish from a racing accident since triple world champion Ayrton Senna in San Marino in 1994.

His funeral will be held at 9am GMT (5pm Singapore time) at the Sainte-Reparate cathedral in the old part of Nice city on Tuesday.

Bianchi suffered a traumatic brain injury when his car careered off the rain-drenched Suzuka circuit during the Japanese Grand Prix on October 5 last year and smashed into a recovery truck at around 200 kilometres an hour.