AUSTIN (AFP) - Already a great in his sport, Lewis Hamilton endorsed his claim to be the outright best of all time on Sunday (Nov 3) when he secured his sixth drivers' world championship and third in successive years.

His success in finishing second at the United States Grand Prix on moved him one title ahead of the legendary Argentine Juan Manguel Fangio and within one title of German Michael Schumacher.

The trio sit in an exceptional place in the pantheon of racing drivers, but are not the only men backed by claims of all-time supremacy - Briton Jim Clark, Spain's Fernando Alonso and Brazilian Ayrton Senna enjoying wide support for their dazzling skills in the cockpit.

Hamilton, however, warrants his fans' claims as a candidate to be the 'Greatest Of All Time' for not only his natural talent, pure speed, race-craft and statistical success, but the way in which his personality and background has attracted a new global demographic to the sport.

Above all, the 34-year-old Briton has delivered with results as he has piled up an astonishing pile of statistical records - 83 wins from 248 races, only eight adrift of Schumacher's record of 91, and a record 87 pole positions.

That impressive body of racing successes is, however, only part of the story - even the most hardened cynics have been stirred since the start of his Formula One career in Melbourne in 2007 by his dazzling high-speed controlled aggression, a style of racing that has been tuned perfectly for the modern media age.

For Hamilton, driving fast is only one part of the package that has made him great.

He links it to racing on the limit, controlling his speed on a knife-edge as he makes the near-impossible seem routine, especially in the matured phase of his career with Mercedes.

While Fangio drove with unarguable courage, finesse and strength in his era, in the 1950s, he was not faced by the intense technological or personal media demands of the modern age in which Hamilton has managed to showcase the purity of his skills. 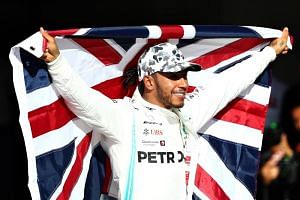 Formula One: Bottas on pole at US Grand Prix, Hamilton starts in fifth

And though Schumacher revelled in the superiority of his Ferrari team, which was built around him, he rarely gained the widespread popular acclaim that Hamilton has accumulated for his heart-on-sleeve way of racing and his never-say-die approach to every contest.

The great German also attracted criticism for his cynical use of the darker arts at controversial moments.

Schumacher clearly had the total backing of his team in his glory years when team orders at Ferrari were in regular use - only an occasional feature of Hamilton's time with Mercedes where his team-mate in 2016, Nico Rosberg, beat him to the championship and promptly retired, exhausted - and this year when Valtteri Bottas was his closest rival.

Rosberg, who has known Hamilton since childhood racing days, has ultimate respect for his former team-mate who he has described as being at another level to all his rivals - a level achieved thanks in part to his father's insistence on encouraging an adolescent Hamilton to brake later than all his karting competitors.

This talent, honed in years of racing, was displayed in Hungary this year when Hamilton went wheel-to-wheel with Red Bull's Max Verstappen to win, having taken a tactical late pit-stop and raced with stunning precision.

Allied to an indefatigable quest for success, his all-round array of polished on-track talents has made Hamilton a complete racing driver and more than a worthy member of the sport's most elite drivers - with claims that put him at least level, if not beyond, Clark, Fangio, Schumacher and Senna.