PARIS (REUTERS) - Six times Formula One champion Lewis Hamilton celebrated the success of his Mercedes team on Friday (Dec 6) and suggested they were being bombarded with calls from rivals wanting to be in his position.

Speaking to reporters ahead of being presented with his trophy at a prize-giving gala at the Louvre museum in Paris, the 34-year-old Briton recognised his was the hottest seat on the starting grid.

"It's an interesting time because there's a lot of drivers who are seeking positions everywhere," said the champion, who will also be out of contract at the end of 2020 and is mulling his options.

"The amount of calls that (Mercedes team boss) Toto (Wolff) gets from every driver, including the one that was up here just recently, asking to come..." he added.

Spaniard Alonso, a double Le Mans 24 Hours winner and present as a world endurance champion, left Formula One at the end of last season but, now 38, has not ruled out a return in 2021.

Dutchman Verstappen, winner of three races this year and third overall, is seen as a champion of the future and very much on Mercedes' radar. He too will be a free agent after next season.

"Everyone's trying to leave their team to come to where we are," said Hamilton. 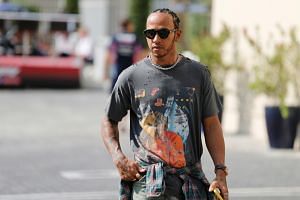 Formula 1: Ferrari happy to hear Lewis Hamilton could be available in 2021

Hamilton, who has been linked to Ferrari with Italian media reporting two meetings with Ferrari chairman John Elkann, said it would be hard to leave Mercedes, who completed an unprecedented sixth successive title double this year.

"I love where I am, I love the people I work with. It's really difficult to walk away from something that you love as much as I do," he said.

"I've been with Mercedes since I was 13. So it's really hard to imagine myself being anywhere else."

Wolff has been talked of as a possible successor to Formula One chairman Chase Carey and Hamilton said the Austrian had to decide what was in his own best interests.

"Would it be the same without Toto? I don't think so," said the champion.

Verstappen said he was not yet considering options for 2021.

"I have one more year on the contract but I think what is more important is that we just see what happens at the beginning of the season," he said.