The Dane lost control of his car as he crested the fast uphill sweep of the Eau Rouge corner and slammed violently into the barriers.

Magnussen, who had started 12th on the grid, emerged relatively unhurt but limping slightly from the crash which damaged the tyre barriers bordering the track.

He was taken to hospital for precautionary checks after suffering a cut to his left ankle in a high-speed crash, said his team.

"He is fully conscious and responsive," Renault said in a statement. "He has a small cut to the left ankle and has been escorted to a nearby hospital for further routine checks."

Officials initially deployed the safety car as marshals worked to repair damage to the barriers, but with extensive repairs required, decided to wave the red flag. 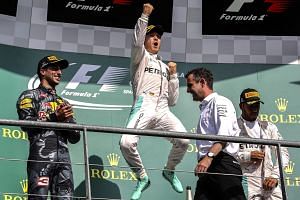 Mercedes pole-sitter Nico Rosberg was leading when the race was halted with nine of the 44 laps completed.

Daniel Ricciardo was second in the Red Bull after a chaotic start in which Max Verstappen, second on the grid, and the Ferraris of Kimi Raikkonen and Sebastian Vettel collided at the first corner.

Lewis Hamilton, who started on the back row after a 55-place engine-related grid penalty, was in fifth.

Hamilton leads team mate Rosberg by 19 points in the overall standings, having won six of the last seven races. He is gunning to become only the third driver to score 50 career wins.