Mexico took charge of Group F with a 2-1 over Korea ahead of the Germany-Sweden game that happened later while Korea bow out after two losses on the trot. El Tri impressed with their incisive counter-attacks while the Taeguk Warriors played with great passion and ultimately, luck did not smile on them.

It takes a strike of phenomenal quality to beat a goalkeeper like Guillermo Ochoa and Son Heung Min executed just that with a curling and dipping shot from outside the box in stoppage time. It may not have prevented Korea's World Cup exit but it surely deserves to be one of the top goals of this tournament.

Trailing to Vela's penalty, Korea searched for an equaliser and when Ki Sung Yeung was dispossessed in the 65th min, it took seconds for the ball to reach the other end of the pitch for Javier Hernandez to finish off a ruthless counter-attack. That is a warning shot to all teams in this World Cup what Juan Carlos Osorio's team is capable of. Just ask Germany. 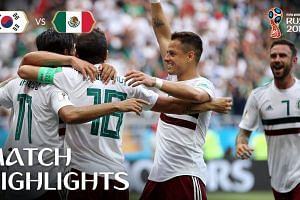 The Taeguk Warriors have a dearth of quality currently and need more men like the stars of yesteryears like Park Ji Sung, Ahn Jung Hwan and Cha Bum Kun but they do have a top-class player in Son. The forward transferred his Tottenham Hotspur form to the world stage and even if he was repeatedly thwarted by Ochoa and his defenders, he finally bulged the net with that stupendous strike in stoppage time.

Mexico are virtually assured of a place in the last 16 with two wins out of two. They top Group F ahead of Germany's match against Sweden. The Mexican players look extremely motivated, as seen in the way they sing their national anthem with gusto. After an uninspired opener against Sweden, it was a much-improved show with 17 shots on goal from Korea this time. But it had come too late - Two defeats on the trot means it is adios to Shin Tae Yong's men.