There was no happy ending to Iceland's fairytale as the World Cup debutants' campaign ended with a 1-2 Group D loss to Croatia on Tuesday (June 26). Needing a win to progress, Iceland fell behind to a 53rd minute half-volley from Milan Badelj before levelling matters through a Gylfi Sigurdsson penalty. Croatia's Ivan Perisic then broke Iceland's hearts by rifling home the winning goal in injury time.

Iceland created a host of chances but paid the price for being profligate in front of goal. Croatia put out their second string with nine changes from the side that beat Argentina 3-0 but did enough to emerge as Group D winners.

Here's the lowdown for the game:

Milan Badelj's half-volley opener was good but not great and there have already been better goals scored at this World Cup. Nevertheless, it served as a reminder of the talent in this Croatian side, that they could produce such a goal without kicking into high gear. 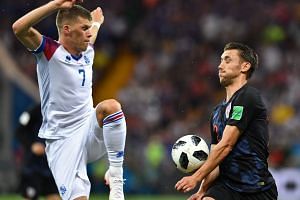 Croatia have won three consecutive games at the World Cup for the first time in their history. This should come as bad news to all their rivals. They have weathered the physicality of Nigeria, came through as the underdogs against Argentina and then as the favourites fought off a plucky effort from Iceland. In short, they have overcome everything that has been thrown at them so far.

Mateo Kovacic. The midfielder did not put a foot wrong all game, completing all 79 of his passes. Croatia simply needed to hold steady for this one and Kovacic epitomised this tidy approach.

5. WHAT THE RESULT MEANS

Croatia top Group D with nine points and move on to a round-of-16 clash with Denmark. On the back of the two sides' group stage performances, Croatia have to be the heavy favourites.

Iceland end their maiden World Cup outing with only one point to show from their battling displays. A sentimental favourite for their underdog status, this is hopefully not the last time we see the nation with a 330,000 population on football's biggest stage.