The 2018 World Cup has served up another thriller as Germany came from behind to defeat Sweden 2-1 in stoppage time in Sochi. After the Swedes had taken a shock first-half lead, Joachim Low went all-out with his attacking tactics to finally force the valiant Scandinavians into submission deep into stoppage time. And what a winner from Toni Kroos, who belted home a thunderbolt of a free-kick to cap a night of drama.

Until the final whistle, the moment of magic had been Toivonen's opener when he cheekily lobbed Manuel Neuer. But Germany refused to give up, lashing 16 shots towards Sweden's goal and it was attempt No.16 that clinched the three points. The pressure was all on Kroos but the midfielder showed world-class technique to hit a free-kick packed with swerve and venom into the top corner when so much is at stake.

Sweden substitute Jimmy Durmaz, who came on in the 74th min, had a cameo to forget. He needlessly charged Timo Werner down in the fifth minute of stoppage time for Kroos to score the winner from the resultant free-kick. Sweden needed to play safe to preserve a point but Durmaz's grave error now means his country will have a nervous final match against group leaders Mexico. 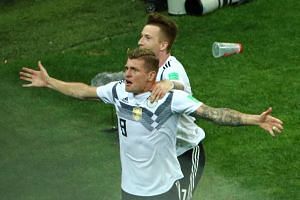 Had Germany lost, it would have meant that Kroos was an unlikely villain. So adept at keeping possession, he gave away the ball that caused Sweden's opener but the Real Madrid man kept plugging away, orchestrating wave after wave of Germany attacks before his toil was rewarded with a top-notch winning strike.

Kroos' missile has revived Germany's dream of becoming the first country since Brazil in 1958 and 1962 to retain the World Cup. Low's side started poorly against Mexico but this wonder strike, coming so deep in stoppage time, reignited memories of classic Germany performances of World Cup lore. Both Germany and Sweden are now level on three points each in Group F with a goal difference of zero. Both countries need to win their last game on June 27 to have a chance to progress to the last 16. Germany arguably has the easier task against bottom side Korea while Sweden faces a very impressive Mexico team.