The curtains have drawn on Group C and Australia have tumbled out of the World Cup after losing 0-2 to South American side Peru. While the Socceroos started in encouraging fashion in an opening loss to France and earned a gritty draw against Denmark, they had no answer to an attacking Peruvian side motivated to end their adventure in Russia with a win after two defeats.

There was still plenty to do when Guerrero delivered a cross from the left flank. With the ball coming in at speed and at height, the winger showed superb technique to volley it first-time emphatically past goalkeeper Mathew Ryan. Peru, who had little to cheer about at this World Cup, will be talking about this for years to come.

With qualification at stake, this was supposed to be a tense affair but Peru's dominance, and ultimate victory, meant that it was carnival time in Sochi's Fisht Stadium. The Socceroos displayed their usual traits of aerial power, strong running and crunching tackles but Peru has flair and imagination in their attacks. That unlocked the Australian defence via great goals from Carrillo and Guerrero. And once those strikes bulged the net, it was party time and the Latin American side's fans have been a real credit to their country for their immaculate behaviour. 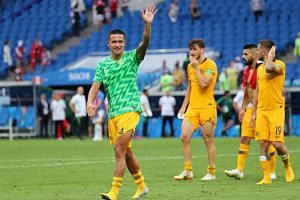 Carrillo is on a season-long loan from Portuguese club Benfica to Premier League side Watford and has scored just one goal in 28 appearances. But give him a Peru jersey and he turns electric. The 27-year-old used his pace to good effect, driving at the Socceroos' defence, dragging markers out of position and opening up space for Guerrero to attack. And how well he took his goal.

Australia started the match needing a win, and a Denmark defeat by France, to go through. But their fate was taken out of their hands by Peru, who were determined to bow out on a high. At 38, this is perhaps Tim Cahill's last World Cup and the same could be said for skipper Jedinak, who turns 34 in August. But is the next generation ready to send the Socceroos to their fifth consecutive World Cup in Qatar 2022? This remains to be seen. As for Peru, they leave with their heads held high. Their football has been stylish, they play with their hearts on their sleeves but they did not enjoy much good fortune on the pitch. Their colourful fans, who never stopped cheering, deserve a standing ovation.