Argentina's World Cup hopes were left hanging by a thread as they were decisively outplayed by an imperious Croatia on Thursday (June 21), with the Balkan nation emerging 3-0 victors.

Croatia were electric and invoked memories of the swashbuckling 1998 team that defied all expectations to make the semi-finals. Goals from Ante Rebic, Luka Modric and Ivan Rakitic propelled Croatia to the top of Group D and into the knockout rounds, and they might have had four but for the crossbar denying Rakitic in the 86th minute.

Argentina, for all the attacking talent at their disposal, were largely toothless and their frustration only grew as the match wore on without a breakthrough.

Willie Caballero's howler allowed a gleeful Rebic to break the deadlock in the 53rd minute and with Diego Maradona watching on glumly, Lionel Messi failed to provide any semblance of leadership or inspiration. Rakitic's goal was farcical in nature as the Argentineans capitulated and waited for an offside call that never came. The pressure will only be heaped higher on the Barcelona star's shoulders after this listless performance.

Here's the lowdown for the game:

Modric's goal was an absolute beauty as he turned Nicolas Otamendi inside out before unleashing a sublime curler into the bottom right corner that gave Caballero no chance.

Croatia might not have had their goals at all if they had been reduced to 10 men in the first half. Ante Rebic, scorer of Croatia's first goal, went studs up on Eduardo Salvio in the 39th minute but inexplicably referee Ravshan Irmatov elected for just a yellow card and no review followed. If there was any moment when VAR should have been deployed this was the one. 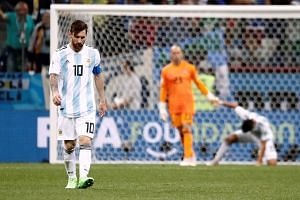 World Cup: Messi's Argentina on brink of exit as Croatia qualify for knockouts

Croatia deserved the win based on how they played with the full 11 but a sending off certainly would have changed the complexion of this game.

Luka Modric. In the battle of diminutive playmakers, the Croat was the only one who showed up. Croatia's win was down to an impressively cohesive team effort but they always looked that much more dangerous with Modric on the ball and creating openings for his team-mates.

5. WHAT THE RESULT MEANS

Croatia, with six points, make the knockout rounds for only the second time in their history and this 2018 group could earn the label "Golden Generation" should they continue their impressive play. Argentina have not failed to pick up a win in their first two group games since the 1974 World Cup, although they did progress to the knockout rounds then.

Much will depend on the result of Friday's Iceland-Nigeria game. Should Nigeria win, Argentina will need to beat the Africans in their final group match and hope Iceland do not beat Croatia. If Iceland win, Argentina will still have to beat Nigeria but an Iceland-Croatia draw would be enough to send them home.