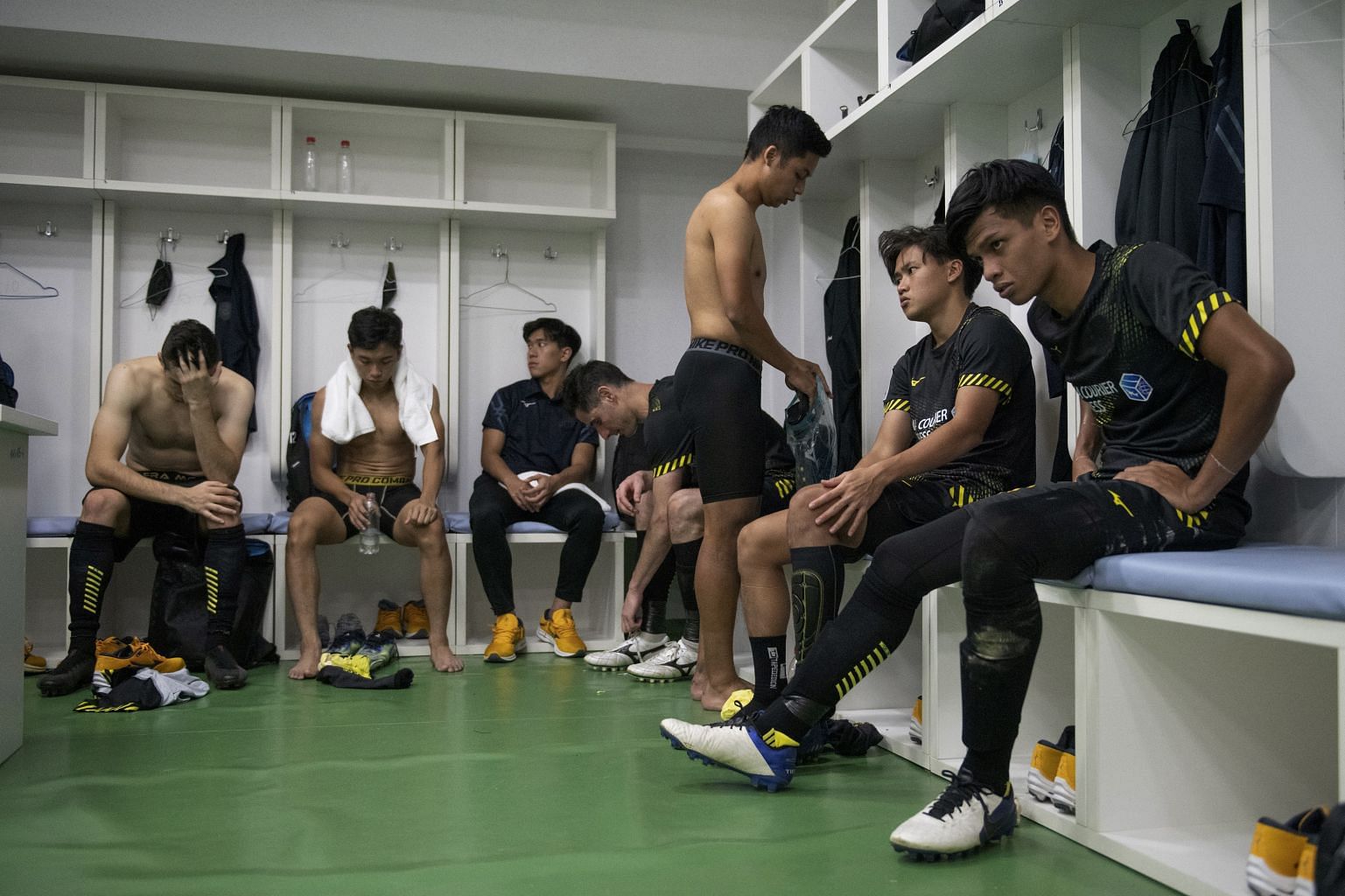 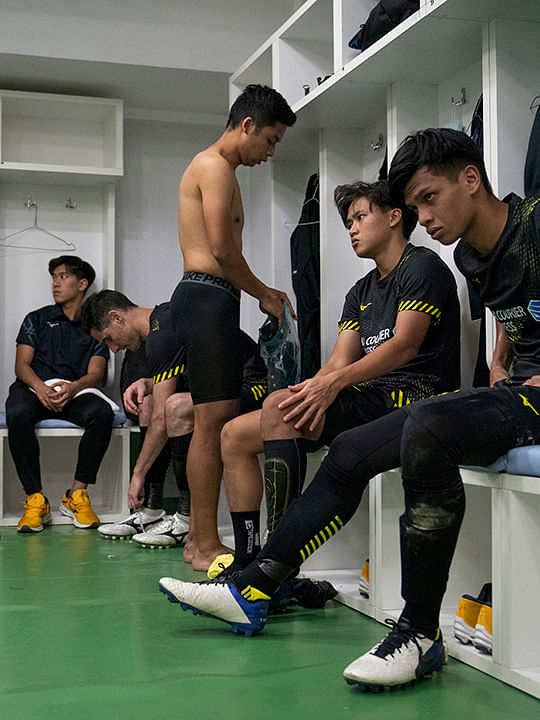 TASHKENT, UZBEKISTAN - The mood in the locker room was sombre. One sat with his head buried in his hands, others stared blankly into space. No one was talking.

Over the field they had just left, a scoreboard advertised the source of their misery.

It's never easy losing but losing 9-0 to South Korea's top football team Jeonbuk Hyundai Motors - who had previously won the Asian Champions League twice in 2006 and 2016 - was record-breaking.

The loss on July 1 was Tampines Rovers' heaviest defeat since 2010. Worse still, they would have to play Jeonbuk again three days later.

Addressing his players at the Lokomotiv Stadium in Tashkent, Uzbekistan, head coach Gavin Lee told them to stay off social media.

Netizens hurled criticism, saying the team wasted their time at the competition and that the score was an embarrassment to Singapore.

"This is not a football challenge but a mental one," Lee, 31, told his players. "How we respond defines who we are."

The heavy defeat was the low point of what was a bruising 24-day Asian Champions League tournament for the team. And this was a team used to winning.

As the best local team in the 2020 Singapore Premier League, the Tampines Rovers became the first Singaporean team in a decade to qualify for the Asian Champions League group stages, which took place between June and July this year.

But there were challenges from the beginning, including those caused by the Covid-19 pandemic.

The team was confined in a playing bubble with regular Covid-19 tests before every match throughout the trip. Almost everywhere they went, they were greeted by attendants in full PPE armed with bottles of hand sanitiser, as seen here at Lokomotiv Stadium.

Their lives were largely confined to the hotel and the stadium, as well as the police escorted bus rides between the two locations.

On days they weren't playing, their days were spent resting in their hotel, or training at the designated facilities.

Ironically, one of the team's high points during the trip was when they watched England beat Germany at the Euros during a meal on June 30. Goalkeeper Syazwan Buhari (far left) said: "Mentally, we were really stretched by the competition but watching this, we felt lighter."

Working within their means

Tampines did not go to the qualifiers with high expectations. From the quality of play to operating budgets of their opponents, there was a huge gulf.

So coach Lee was actually upbeat after the Stags first match of the competition against Japan's Gamba Osaka, despite the team losing 2-0.

Gamba Osaka was Japan's second-best football team in the J1 League last year. The team is also a regular competitor at the Asian Champions League, and won the title in 2008.

Gamba also fielded players such as Wellington Silva, who used to be at Arsenal, Gen Shoji who played for Toulouse, and Takashi Usami - seen here dribbling in between two Tampines players - who played for Bayern Munich.

Shoji is estimated to be worth 1.8 million euros (S$2.8 million), which is more than the yearly operating cost of Tampines Rovers.

Surprisingly, Tampines dominated control over the ball. Match statistics showed the team had 58 per cent possession with 87 per cent ball passing accuracy.

For Lee, the results affirmed that they could compete, even though they do not have the same resources as their opponents.

"We found many solutions to play under pressure," Lee said.

But soon fatigue set in. Due to the pandemic, matches were played back-to-back with only three days' rest. This took a toll on the players, some of whom played more than 400 minutes in the tournament. The depth of the squads for Gamba Osaka and Jeonbuk Hyundai Motors means that they could make numerous changes to their starting line-ups between the first and second matches, whereas Tampines did not. Out of the 24-men squad, Tampines had 11 Under-23 players who had not been exposed to playing at the highest level.

On July 4, the Stags faced their Korean tormentors again, this time determined to do better. "It's all about us and our response, so let's go out there and get a performance we'd be proud of," said the coach to his team before the game. Look around this 360-degree video to see the mood of the team before the start of the game.

At half time, there were already tangible signs of improvement. Midfielder Marc Ryan Tan, seen receiving treatment from physiotherapist Trevor Lee for his left ankle, learnt from mistakes made previously. The Koreans had only scored one, compared to 4 in the first half in the former match.

"Jeonbuk started to panic and started throwing out their superstar players, so I think that was an indication of our response," said Lee.

One of them was Brazilian Gustavo Henrique da Silva Sousa, seen here tussling with Tampines Rover's Zehrudin Mehmedović at the Bunyodkor Stadium. The striker was substituted in for midfielder Kim Bo-kyung at the 35th minute and scored a goal in the 64th minute.

And though the Stags battled valiantly, there would be no fairy-tale redemption, especially after team captain Yasir Hanapi was sent off the pitch after being shown the red card for two offences and a brief confrontation with a Jeonbuk player.

With one man short against their opponents from Jeonbuk Hyundai Motors, Tampines Rovers lost 4-0.

As soon as the team returned to their hotel, Yasir began taking orders for burgers and pizza.

"I thought why not buy them some food as a token of appreciation as they had to work extra hard without me on the pitch," he said.

In this photo he is handing a burger to the youngest member of the team, Adam Reefdy.

The string of losses was especially tough for Yasir, 32, who was part of the national team that went to the World Cup qualifier matches in Saudi Arabia in June and lost three of their matches.

The Stags ended up losing all six matches over 24 days, and many at home wondered why they chose to compete in Asia's top football competition.

It is not just about winning, but learning, said Lee. "Humans will always adapt to their environment. So if your environment is of a higher level, you will either adapt or you will become extinct."

Learning from the best

Defender Andrew Aw Yong, 18, said it was eye-opening to watch the Korean players in the gym. They had individualised workout regimes, and they stretched to reduce injuries during matches.

"I realised that professionalism is quite lacking in Singapore. Players don't really care about their diets and their bodies," Aw Yong said.

Midfielder Iman Hakim, 19, thought his experience in the SPL and some regional competitions made him ready to compete in the Asian Champions League. But he realised how much more he has to improve. During the game against Jeonbuk Hyundai Motors he made a mistake that led to a goal.

"I think quicker now and I'm more aware of my surroundings when making a decision. I try to go into challenges stronger with my whole body weight in, instead of just putting my legs in," he said.

After the Stags returned from Uzbekistan, they faced numerous challenges.

They were unable to train during their quarantine after two players tested positive for Covid-19. The team served a two-week quarantine at hotels that were in line with the Ministry of Health's protocols.

When the Stags resumed play in the Singapore Premier League (SPL), they faced another five consecutive losses.

"People assumed that when we came back from the Asian Champions League, everything would be a lot easier. But I don't think we really recovered sufficiently," said Lee.

The Stags eventually finished fourth in the SPL that concluded on Oct 10 . The league was won by the Lion City Sailors, who will be competing in next year's ACL.

Despite the unfavourable results, coach Lee says that it should not hinder the team and cause them to see their ACL experience negatively.

In the last game of the season against Geylang International that ended in 1-1 draw on Oct 10, Baihakki Khaizan takes a moment to chat with Tampines Rovers chairman Desmond Ong after his match as his children watch on.

The defender has since left the club, together with other veteran players like Madhu Mohana and Montenegrin forward Armin Bosnjak.

To which, coach Lee says that this would give opportunities for younger players, such as 21-year-old midfielder Amirul Haikal (#12) seen receiving a pat on the head by Lee after the season's last game held at Our Tampines Hub, to step up in the upcoming 2022 season.

Lee hopes the team will continue to draw on the experiences from witnessing the top Korean and Japanese teams to improve their training and management processes despite their budget constraints.

"We are holding ourselves to a higher standard and that should be the most important thing with everything we do from now on," said Lee.

Shintaro Tay tracked the team while they trained and played in Tashkent, Uzbekistan for the Go-Far (Going Overseas for Advanced Reporting) module of the Wee Kim Wee School of Communication and Information at Nanyang Technological University.