Former Australia skipper Aurelio Vidmar has been in Singapore for only two months, but the Lion City Sailors coach has already set an ambitious goal for his men to win the Singapore Premier League (SPL) and earn themselves a shot at Asian Champions League qualification.

The team, previously known as Home United before it was replaced and privatised, wore their signature red kit for the last time at Bishan Stadium yesterday, as they prepare to usher in a new era by ending their 17-year wait for a league title.

Vidmar, who took charge of the Socceroos for a match as caretaker coach in 2013, said: "We want to win the championship. There's no magic formula, we have to work hard.

"We had a poor season last year so I'm sure everyone wants to redeem themselves from that."

Midfielder Shahril Ishak is also out to forget last season, in which they finished sixth, when the SPL campaign kicks off on Feb 29.

With a roster beefed up by national players Gabriel Quak, Shahdan Sulaiman and Hassan Sunny, the 36-year-old believes they are contenders for silverware.

He said: "It was not the best result in Home United's history but we are more positive now that we've strengthened the team.

"With this new management and investments coming in, we've been pushed to the next level. It shows we are very serious this season."

"Shahdan is one of the classiest players in the competition, and he's going to be really pivotal in how we're going to play. Gabriel is a guy who can win a game by himself."

Promising talents such as Saifullah Akbar, Haiqal Pashia and Naqiuddin Eunos have also been recruited from the Young Lions. They also signed Australian forward Andy Pengelly from Brisbane Strikers and defender Kaishu Yamazaki from Albirex Niigata. 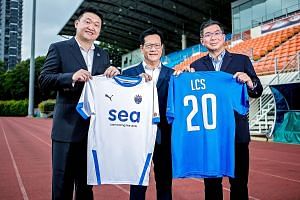 Captain Izzdin Shafiq believes Vidmar's influence has rubbed off on the players ahead of their season opener against champions Brunei DPMM at Bishan.

He said: "He not only demands a lot from us, but also emphasises on the very small details, so that we know what we're lacking in and to help us improve."

Shahdan added: "He wants a two-way relationship with players, not just him calling the shots, so he makes himself available to us players for whatever issues that we have and that's always encouraging."

Vidmar was pleased with their preseason in Kuala Lumpur where they played Malaysian sides Johor Darul Takzim and Selangor II.

Although they lost both games, the 53-year-old praised his players' "fantastic" attitude. He said: "They're really focused and energetic when we've tried to teach them new things. We're still working on the game style, but that's a continuous thing.

"The players like to watch the game, but they also have to watch what's happening around them because the game changes every second. We're slowly changing that mentality and getting them to be more vigilant."