Ten-year-old Chae Min has been watching football for the last three years - often on the sidelines of her older brother's games.

But on Saturday (July 28), the Nanyang Primary School pupil will get to take centre stage briefly as European giants Arsenal and Paris Saint-Germain lock horns at the International Champions Cup (ICC).

Min has been chosen as one of three children to escort the players out onto the National Stadium pitch before the kick-off. There were 199 applications for the role in a contest run by The Straits Times and ICC organiser Catalyst Media Group.

When she learnt that she had landed the role, she told her parents: "Instead of watching kor kor (big brother in Cantonese) on the pitch all the time, this time you will see me."

Min, who also plays football with her brother, Chae Tjer, is thrilled by the prospect of meeting the stars from her favourite team, Arsenal.

She said: "I support Arsenal after being introduced to the team by my brother, and I love (defender) Hector Bellerin, because of his skills and his hair. His hair is really nice."

Her love for the game started when she began memorising the names of the players on the pitch while watching games on television with Tjer, who is 12 this year. 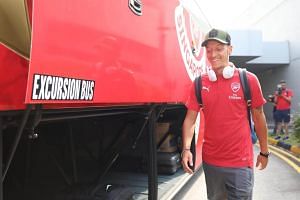 The pair, together with their father, even stayed up late to watch the recent World Cup matches so that she could catch her favourite Gunners in action.

Family ties also run strong for Sarah-Ann Seet, nine, who will accompany her idols when Arsenal meet Europa League champions Atletico Madrid tomorrow. She hails from a family of football fans, and plays the sport every weekend with her cousins.

The France fan was overjoyed when Les Bleus lifted the World Cup 10 days ago (July 15).

The CHIJ Our Lady of Good Counsel pupil, a fan of Atletico and France star Antoine Griezmann, said: "I hope I will be able to walk out with Atletico at the game."