The season may be only be six games old but already it is hard to see Jose Mourinho’s side competing with Liverpool and Manchester City for the title.

Away wins over Burnley and Watford, as well as the midweek Champions League victory at Young Boys Bern, had eased the sense of frustration at the club following their poor start to the campaign.

But Mourinho was again left questioning the attitude of his players after what was a thoroughly deserved point for Wolves, who could have left with all three.

“I think the result is fair. They deserved their point and we deserve the punishment of only getting one point. They started better were more aggressive, had more intent and I don’t know why but they were more motivated,” the United manager said.

“I was expecting more from my attacking players. There was not enough creativity, movement or dynamism,” he added.

Prior to kick-off the home crowd enjoyed the sight of Alex Ferguson back at Old Trafford for the first time since his brain operation in May but the brief reminder of more successful days was soon replaced by the contemporary United. 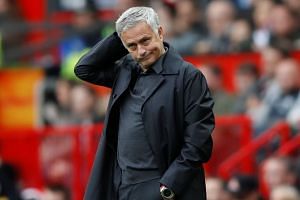 It was Wolves who started brightest, showing confidence and ambition to create three opportunities in the opening 15 minutes, the latter a Willy Boly header that forced a good save out of David De Gea.

But it was United who grabbed the lead, against the run of play.

Brazilian midfielder Fred drove home from the edge of the area after a sublime, one touch, deft short pass from Paul Pogba.

Wolves had looked nothing like a promoted team, playing composed and intelligent football and they earned their reward with a finely worked goal after the break.

Helder Costa got past Luke Shaw and slipped the ball back to Raul Jimenez who perfectly teed-up Joao Moutinho and the Portuguese midfielder fired into the top corner.

Not for the first time United looked a little panicked by a conceded goal – they pushed forward but their shape and confidence was no longer there.

Jesse Lingard had a good effort tipped over by Rui Patricio in the 67th minute and Marouane Fellaini had a header from a Luke Shaw cross well dealt with by the Portuguese keeper.

Romelu Lukaku, who had a poor game, hesitated in the box, failing to latch on to a half-chance five minutes from time and that was it.

The speedy substitute Adama Traore threatened to take all three points for Wolves at the end, but after forcing De Gea to save at the near post, he was selfish with a long-range effort.

Wolves manager Nuno Espirito Santo felt his side could have enjoyed a famous victory.

“I thought it was a point deserved, but we had the chances that showed with better decisions we could have won,” he said.

“We are growing game by game.”