The first Singaporean to score in Thai League 1, Gabriel recorded four goals and one assist in 24 games for Navy in 2018.

Despite their eventual relegation, Quak had done enough to not just become a fan favourite but also earn a Lions recall. Rediscovering his creative abilities and adding a defensive dimension to his game, the fleet-footed winger was one of the bright sparks in Fandi Ahmad's national team.

While Quak was released by Navy, there was interest from other Thai clubs, as well as Indonesia's Barito Putera. But he had already set his mind on returning home to nine-time champions Warriors FC, who he had actually signed for last season before Navy came in.

He said: "I thought about playing in the Singapore Premier League when I found out my wife was expecting our second child.

"I already missed out on a lot of my firstborn's childhood moments because I was in Thailand and these are the things money can't buy.

"I hope to continue scoring and creating goals for my new team but the main aim is to add one more star to the Warriors crest. We want to take the club back to the top and make it to the AFC Champions League qualifiers or AFC Cup."

A poster boy for the National Football League, Shawal Anuar made the leap to join Geylang International's professional ranks in 2014 and never looked back.

Despite his waifish 1.68m, 58kg frame, the 27-year-old winger has tormented defences with his speed and goal sense. In just 77 league games, he scored 22 times for the Eagles, and he also took just two international appearances to grab his first goal for Singapore.

Both club and country missed him dearly when Shawal tore the anterior cruciate ligament in his right knee during a 3-1 league win over Young Lions last July, which ruled him out for the rest of the season as well as the AFF Suzuki Cup.

Eager to make his return, Shawal said: "I was really sad to miss out on the Suzuki Cup, but now I'm focused on making a full recovery and coming back stronger. 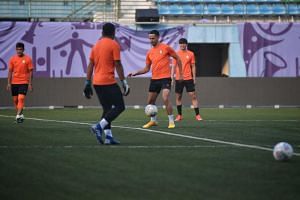 "I had 17 league goals in the past two seasons and I want to score more this season. Geylang have a really balanced team this season, we have bonded well pre-season and we are feeling really positive about the new season."

The last time Stipe Plazibat played in Singapore, he scored 37 goals in 39 games for Home United in all competitions in the 2017 season.

It earned him a move to Thailand in 2018, but it ended up being his most turbulent season yet as Bangkok Glass de-registered him just two days before the transfer window closed. Mutual termination came only in June and he returned to Croatia to play for NK Solin in the second division.

The 29-year-old striker is no stranger to Hougang fans as the Cheetahs were the first Singapore team he signed for in 2016, when he scored 16 league goals.

He said: "It feels like homecoming, and also unfinished business because I know many people and places here and I feel secure, and I have very good chemistry on and off the field with players like Faris Ramli, but I also really want to win something here.

"My target this year is team success because in the past I scored many goals but didn't win anything. I always aim to score in every game, but the most important thing is to feel that my conscience is clear after I have done everything I could on the pitch."