SINGAPORE - It may be still early days in the 2019 Singapore Premier League (SPL) season, but a marker could be laid down in the clash of title contenders Tampines Rovers and last year's unbeaten champions Albirex Niigata at Our Tampines Hub on Friday (March 29).

In a reversal of roles, it is the Stags who are marching relentlessly while the White Swans are struggling for rhythm.

League leaders Tampines, on a maximum nine points after three games, can open up an 11-point gap over Albirex, who have one point from two games.

Second-placed Brunei DPMM FC, on seven points from three games, are not in action until they play the Stags on April 7.

But Tampines' head coach-in-waiting Gavin Lee does not think this Irrepressibles versus Invincibles fixture will have a huge bearing on the title race.

He said: "This is just the fourth game for us and the third for Albirex. There are 20 more games to go and anything can happen. This season is going to be a close race."

Under the former Warriors FC assistant coach, the Stags have won their first three games through their brand of high pressing and passing football, scoring a league high 11 goals and conceding twice. 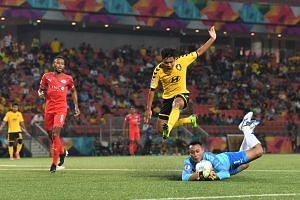 In stark contrast, Albirex, champions for the past three seasons, have yet to bulge the net in the SPL this year.

The Japanese club's coach Keiji Shigetomi feels that "every game is important", but his focus is on drilling his players to find the target.

He said: "We didn't have the ability to score. That is why we did more attack training last week."

Lee is not taking anything for granted and he believes the White Swans are more dangerous when wounded.

He said: "Knowing the Japanese, they will work extremely hard to correct something if they didn't get it right the first time."

The duo started in Singapore's two matches against Malaysia and Oman in the AirMarine Cup last week and Lee is looking for more from the rejuvenated duo.

He said: "I'm very happy and proud of them (Irwan and Amirul)... and there's going to a lot more coming from them as they will be motivated to get called up more often."