ST PETERSBURG (REUTERS) - Sweden are delighted to make it to the quarter-finals but they are not satisfied yet, coach Janne Andersson told reporters after his side edged Switzerland 1-0 to reach the World Cup quarter-finals for the first time since 1994.

In another gritty team performance, Emil Forsberg's deflected shot secured victory over a misfiring Switzerland who were smothered by Sweden's defence, and set up a clash with either England or Colombia on Saturday.

"This team personifies the approach we all share - we work for each other on and off the pitch, and I'm incredibly happy that it's paying off," Andersson told reporters.

"We're going to focus on one thing when we've digested this victory, and that's the game on Saturday. We don't even know what team we will face yet, but that is going to be the focus of our preparations," he said.

The Swedes have now seen off Netherlands from their qualifying group, Italy in a playoff, Germany at the group stage and Switzerland in the last 16, leading to questions about whether other nations have underestimated Andersson and his men.

"I think you'd have to ask everyone else that question. We know we are a good team, that we've earned our successes - we know how we got this far," the 55-year-old explained.

"We've worked this way throughout, we're continuing the same way, and what other teams and countries think about that is not terribly interesting." 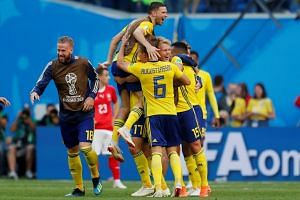 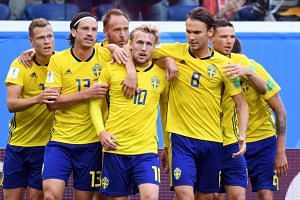 The delighted Sweden fans stayed behind to sing their modest coach's name long after the final whistle, and he came back out after the teams had left the field.

"It's a surreal feeling, to be standing in St Petersburg on the pitch afterwards and people are calling out my name. That feels strange - during the match I'm very much focused on the game," he said.

Sweden may have exceeded expectations in Russia but they are not done yet, and Andersson and his squad will now assess the players and their coming opponents before going into battle again.

"Now it's about taking the next step. We're not satisfied with this, and nothing more," he said.

"We want to win the next match as well - if you start to lower the bar, the level of ambition, that's not going to make for satisfaction."